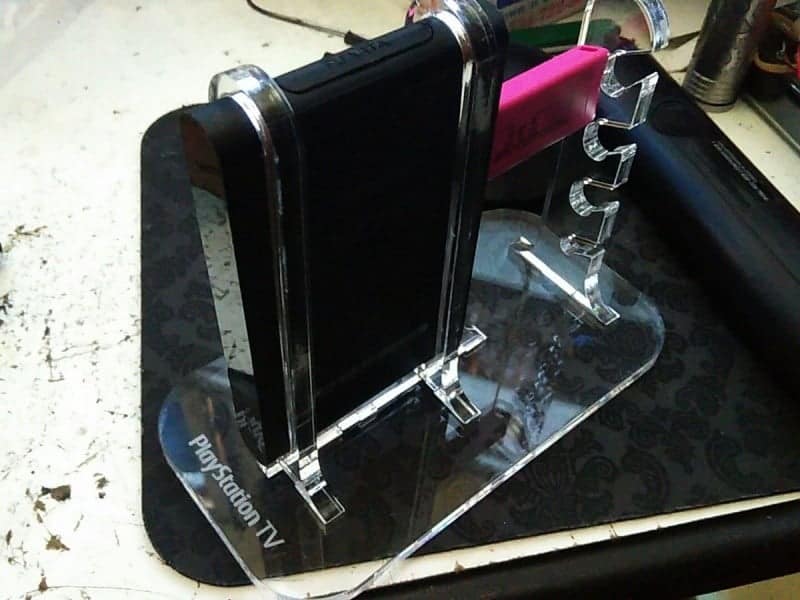 Our Review of PSTV Stand from Rose Colored Gaming

From controller stands to fight sticks to stylish Nintendo 64 game boxes to posters and so much more; Rose Colored Gaming is an accessory website that you didn’t know that you needed. Everything that they furnish is one of a kind, completely unique, thought up and designed by them and even manufactured by them. Today, we have a stand from their website for the PlayStation TV to review. I suggest that you read on!

We chose to review the PlayStation TV stand for several reasons. It was, like all of Rose Colored Gaming’s accessories, inexpensive. It had relevance to our Hackinformer audience since we do a lot of reporting on PlayStation TV. But the biggest reason of all is that it was the only stand that existed that really needed to exist. In other words, Sony gave us this cute little black box that runs Vita cartridges and has a slot for a memory card and supports 720p over HDMI, which is great, but it also sucks because it just…lays there. It has no style honestly and frankly, if you’re gaming in the dark, you haven’t a clue in the world where the thing is without either turning on the lights, following the cords from the wall/tv to the box, feeling around for it, or simply saying “screw it” and powering it off with a controller. This stand will just make it so much more obvious for you.

I had taken pictures for this article, but then I looked at their website and realized that what they had posted made far more sense as they had better lighting and backdrop. As you can tell by looking down the article there are 3 colors that this stand comes in. At the top you have the transparent model, the second picture is the completely black model, and the last picture is a frosted one. The one that I got with the intention of reviewing was the frosted one. They’re cut from acrylic and so it has more of a thick fiberglass feel. They are not actual glass, but they are not junky plastic either. You can tell that they will last. The PlayStation TV logo is engraved lightly in the top. Not a very deep engraving (you won’t be seeing a lot of dust accumulation in it), but deep enough that it’s still legible. It’s something that you will have to put together on your own and if you get frosted (at least) you will have to peel the protective backing off of the bottoms and backs of the pieces. I would recommend either frosted or the clear one in terms of spotting your device in the dark to do what you need to do as it can refract and reflect light depending or at least magnify any light that may be coming in from outside or what have you (night time is spooky). 10/10

There are 2 key features that I wanted to focus on in terms of the functionality of the PlayStation TV stand. The first being that it keeps the device vertical. They could’ve designed it to hold the item in a horizontal plane and just raise it up a bit higher, but they didn’t. By keeping the device vertical you gain several attributes that were not previously there on the PlayStation TV. The first being easy access to the cartridge slot on the device. In the default state, you have to pick up the PlayStation TV each and every single time that you want to change out cartridges. Additionally, what is also gained is easier access to the power button as now it is on the top (even though it is still on the back for whatever reason). And of course, with it in a vertical position, you also have much greater access to and control of the ports and their subsequent cords.

This brings me to the second key feature that I wanted to focus on for the stand’s functionality. You see the obvious post with empty slots that are standing behind the PlayStation TV. These are for each and every cord that plugs into the Vita. This keeps your cord management so on point it’s not even funny. What’s really great about the slots are angled differently at their respective heights so that the cords stay in within its particular slot and what is even better than that is that the power cord slot is a smaller slot since the cord for the power supply is thin. Your USB slot may be taken up by the fact that you’re charging your controller or with the influx of people using USB hard drives or both if you’ve got a USB hub. Either way, you still have great cord management. They truly put a lot of though into the execution of a lot of the aspects of this to give you solid functionality that Sony skipped over in an effort to make a quick buck. 10/10

You can see by the pictures that you have a stand that is about 3 inches wide and 6 inches long. The height of it in total is also about 6 inches. The acrylic is all about 3/4 of an inch thick everywhere except where it wraps around the PlayStation TV itself. In that area, it’s about 1/2 inch thick. They really put a lot of thought into it, truly. The pieces that hold the PSTV are pressed down into the base and have a horizontal piece that goes above them that locks it into place. Now I’ve only had this less than a week, but I’ve moved it around a fair bit and the only thing that I can mention is that the areas of acrylic that have to fit into the holes on the base have a slight wiggle to them (and they have a high pitched squeaky noise at that), but the idea is that you “set it and forget it!” and there really isn’t any reason to touch it unless you’re changing out games or doing the less likely, upgrading of memory cards. Like I said, I’ve had it for less than a week, but judging by the build and it’s purpose, I’d say this thing should absolutely last the life of the PlayStation TV. 9.5/10

I thought I’d end this review sharing what our very own Hackinformer blogger, riddle43 did with his. You could do the very same thing with either the transparent or frosted iterations!

All in all, it’s a great accessory and at $9.99 I suggest you get one right now. Click here to start your purchase.

If you want to see the rest of their products, you can visit Rose Colored Gaming by clicking here.

@V1RACY
Previous PSVita: You can now run Asphalt Injection at Native Resolution and the difference is huge
Next How to: Linux on the go