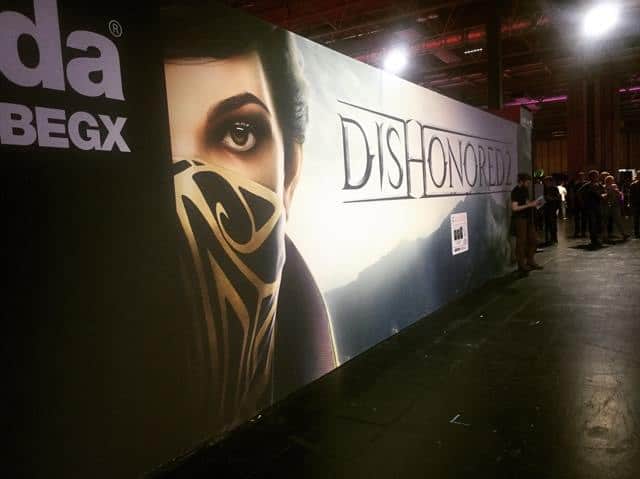 At EGX this year in Birmingham, we had an opportunity to get some hands-on time at Bethesda’s Dishonored 2 booth which was the first global hands-on demo for the multi-award winning stealth-action squeal.

The demo gave us a choice between Corvo or the franchises new playable heroine, Emily Kaldwin.

Jumping into the Clockwork Mansion mission, which is the game’s fourth sequence, it felt right that I stepped into the boots of Emily Kaldwin to infiltrate the mansion of the Grand Inventor, Kirin Jindosh.

As the demo started off in a tram car that would transport Emily to the mansion, I was quite impressed with Arkane Studios new void engine coupled with the striking art direction from Sebastien Mitton and his talented team for the visual style in the city of Karnaca.

Mitton stated that this time around they pushed for, “more dedicated thematic missions” like Lady Boyle’s mansion in Dishonored 1 which was a bit different to the rest of the game.

He continued,“This time we have the Dust District with random storms where the guards are blinded by the sand. We also have this clockwork mansion with every room moving, and it’s not fake – you can bend time and go into the backstage of the house. We have the past/present mission we showed at E3 where you can look in the past and change things and you have different layers of present because you act in the past.”

At some point in my session I dropped in an area using one of Emily’s abilities that landed me in an out of bounds section in the Clockwork Mansion that Sebastian Mitton mentioned in the Q&A session, a trigger that enabled a behind the scenes transformation. The house goes from a steam-punk glossy mansion to a more industrial aesthetic as many would have seen from the various E3 and Gamescom cinematic trailers. It was fantastic to be so immersed in that moment to see it multiple times and to hear it being spoken about to finally being able to experience it for yourself.

Sebastien who attended EGX for a Q&A session near the booth also signed a personal copy of the first issue of the comic books by Titan Comics that was announced back in May.

During the Q&A, Mitton was asked what was new this time around with Arkane’s current void engine and art style as Dishonored transitioned from last gen to current gen.

Mitton stated, “the engine has been crafted by us. It is based on the Id Tech 5 engine, but we kept like 20 percent of the engine and we did the AI stuff. We’ve put a lot of energy in the development side also – all the tools we needed. And the graphical side also has been enhanced a lot. We did everything ourselves – the lighting, the shadows.”

Vibrancy of graphical achievements was noticeable in sunlight that bounced off pillars and water from the bay distanced in the city of Karnaca, with many others around me who were also in awe in the opening minutes of the demo session.

In one way the art style starkly contrasts that of the first Dishonored but also takes many elements from the gritty underbelly of Dunwall as darker pallets were predominantly utilised compared to that of Karnaca that showcases a lighter, glossier touch.

Mitton commented, “here the art direction is still world class, but the graphics have been so enhanced that it’s really equal.”

The two objectives you are tasked with are to rescue a returning character to the franchise, Anton Sokolov and to take out the clockwork engineer Jindosh in his clockwork fortress.

The gameplay had outstanding polishing and refinements that built on the first title’s already impressive melee and ranged combat mechanics.

Playing as Emily in my hands-on session allowed me to experiment with quite a few of her brutal abilities that I found to be aggressively agile, like Shadow Walk which enables her movements to turns from physical to a smoke-like form that can tear an enemy in two if attacking in said form. Domino which was a second ability available in the demo focuses on tagging up to three enemies where inflicting damage on one chain effects to the other two.

Far Reach which I considered to be one of her more unique skills is mirrored to Corvo’s blink ability allowed seamless movement throughout the ever changing mansion such as manoeuvring through hard to reach gaps that you wouldn’t normally be able to get to.

Even when Dishonored 2 had been announced back in June, I knew I was going to be pre-ordering the collectors edition considering how much I loved playing the first instalment back in 2012. All the trailers from E3 and Gamescom leading up to the release of Dishonored 2 are not just smoke and mirrors especially after speaking with Sebastien Mitton, I understood for myself just how much has gone into this instalment.

Dishonored 2 will be available on November 11 for the PS4 and Xbox One, in the meantime here’s a creative kills gameplay video for you to enjoy below.

For more news on EGX and Dishonored 2 don’t forget to follows us on our official Twitter pages @Geestaar74 and @Hackinformer.

I like to get everyone the right info and I like to help others get the most from there electronic devices. I enjoy playful cleverness and the exploration of technology. My Motto: You own it, you can do whatever you want with it.
@HackInformer
Previous Transformer Waifus Incoming! Drive Girls coming to the PSVita!
Next Have you begun your Countdown to Nightmares for Yomawari: Night Alone?