Attack on Titan from Koei Tecmo hits in a BIG way!

I don’t know about you guys but I have been eagerly awaiting Koei Tecmo’s version of Attack on Titan since it was announced! Most of us probably have some reservations after seeing the last attempt at an Attack on Titan game but this one blows it out of the water! I honestly don’t know how they could’ve made this much better! It truly looks like a manga come to life.

Attack on Titan starts off basically at the start of the manga/anime. You go through training just like Eren, Armin and Mikasa did. Your character learns to fly with the ODMG. After that he/she learns to focus on a Titan and take it down, or subjugate it as the game calls it. 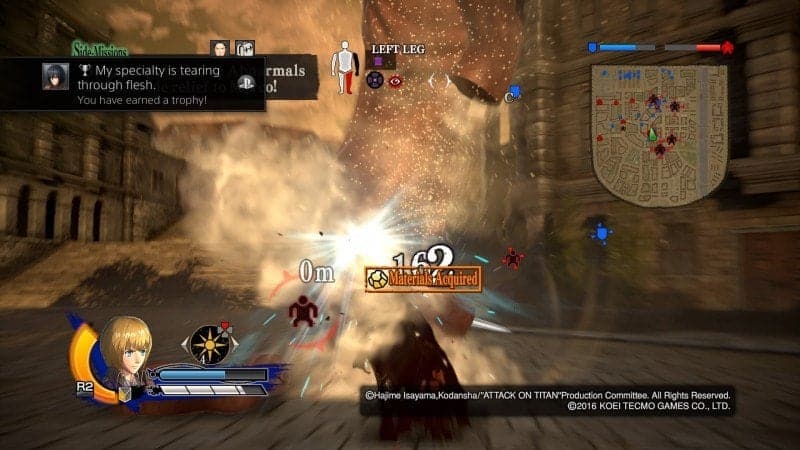 You can play through the storyline as you would expect or you can play “exhibition” mode where you simply take on individual missions to expand your area. Now you may be thinking this is just another single player, run through the game and be done but think again! You have the option to connect with your friends and complete missions as a team, demolishing titans like a hot knife through butter.

You have 4 different areas of equipment: Blades, scabbard, ODMG and war horse. The scabbard controls your gas and blade quantities. The others are basically self explanatory. The player is rewarded with materials for chopping off limbs and sometimes extra materials that are shown on a Titans body. These materials are needed to craft new equipment and also to upgrade existing equipment. The variations are endless. 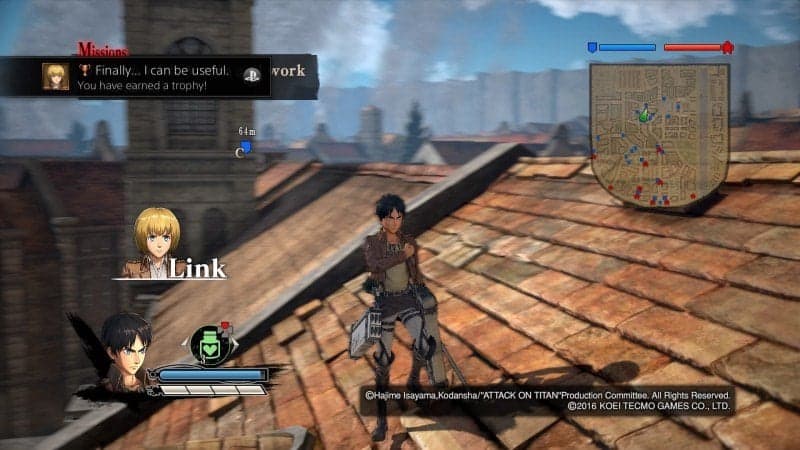 You can recruit a team of as many as you like but only 4 can be with you at any one time. When you approach another soldier they will have a grade above their head determining their Skill level. Most are “C” in the early game.
So far I have played as Eren, Mikasa, Armin, Eren as a Titan and most recently Levi. Just as you would expect, Levi is definitely a gigantic badass! He shreds Titans like they’re a joke. 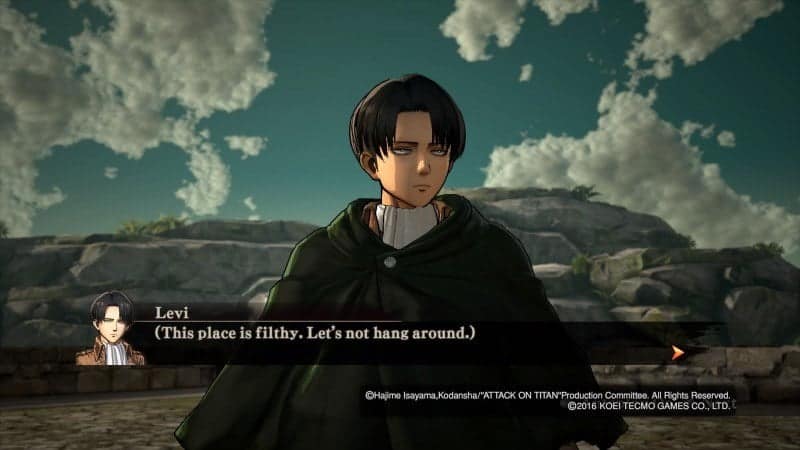 Completing missions gives you a scorecard and depending on your performance you can get anywhere from an F, I assume, up to an S rating which is the best. An S rating gets you bonus materials.

You will inevitably be grabbed by a Titan at some point. It just happens. The game is obviously over if you are eaten but being grabbed doesn’t necessarily mean you’ll be dead. You can rapidly press triangle and essentially chop off the Titans hand. You do take damage and it impedes your movement but there are potions that will replenish your health. Also, just like in the show, you must pay attention to your blades and your gas. You can easily have damaged blades or run out of gas. Each scabbard holds a set number of blades and gas canisters. You can replenish your stock by seeking out supply people that are strategically placed throughout some levels. 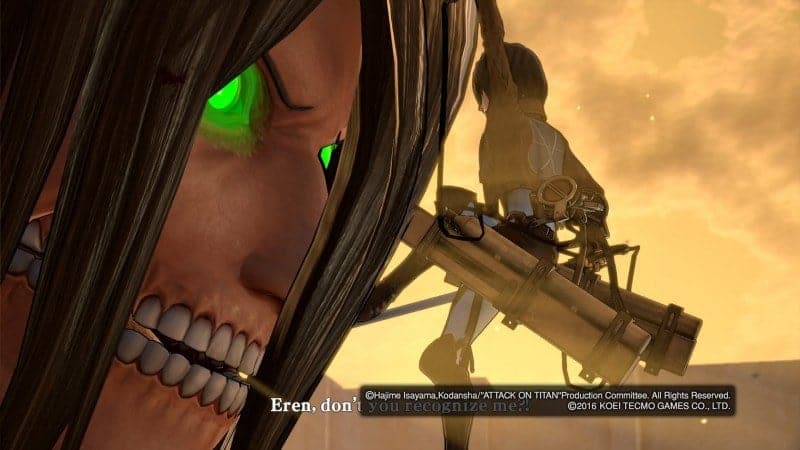 Now, adjusting to the combat is something that will take a little time for some people, myself included, and some will take right to it. You use your ODMG with square and boost with X. When you are in range of a Titan you will see yellow boxes centering in on the Titan you can target. If you press R1 at that time you go into target mode where by you may attack and subjugate the Titan. Once you are anchored to a Titan, moving the left analog just moves you around the target. Your character will reel in to the area you are attached to for an attack when you let go of the analog. Triangle will initiate a swipe of your blades to slice into that Titan.

Some characters have different special abilities that will automatically trigger when the conditions are met. For example, Eren has the ability to do a powerful attack when you come down from above a Titan. Levi has a spinning slash that triggers on its own as well. 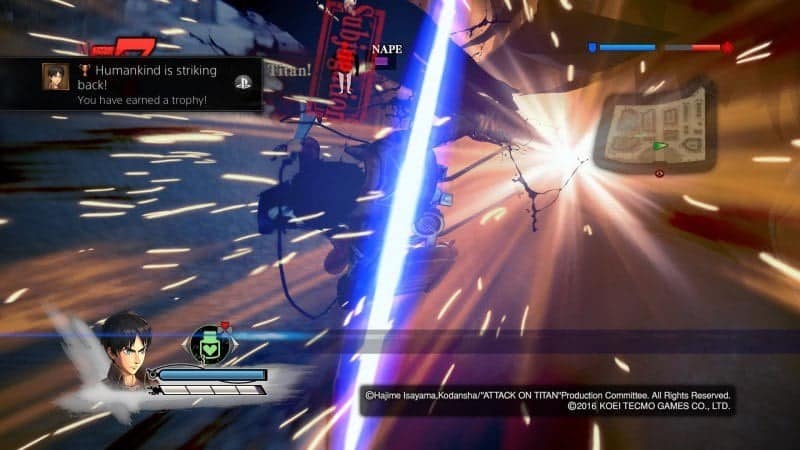 The graphics on this game are simply a work of art. The characters are instantly recognizable. Eye catching colors along with all of the action that takes place in a short amount of time make this a stunning visual smorgasbord.

One great thing about Attack on Titan is that you can revisit all of your previous missions after a certain point. What makes this option absolutely spectacular is that you can take your current character, be it Mikasa, Eren or even Levi, and play the early missions to improve your score card. Some are astoundingly difficult to get an S rating on. That’s the fun though isn’t it?

Overall, this game has to be one of my favorites in a long time. For me, it ranks right up there with the Souls games with the way it draws me in. I would easily give it a 9/10. The only reason it’s not 10/10 is I think the combat and the map get a little bit too busy at times and it’s hard to see what’s going on. Aside from that, it’s flawless in my opinion. The game releases on August 30th, 2016 for PS4, PS3, PS Vita, XBoxOne and Steam.

Whether you have been an Attack on Titan fan since the beginning or this is your first introduction to it, this game is more than enjoyable enough to keep you entertained for hours upon hours. It essentially tells the story from the beginning and lets you experience it first hand. Let me know what you guys think of it in the comments and if you disagree I will be glad to entertain your opinion. Thanks for reading and as always…. HAPPY GAMING!!!!

Just your friendly neighborhood redneck from Alabama keeping things interesting. I cling to my God, my games and my guns! Roll Tide and HAPPY GAMING!! You can find me on Facebook and Twitter @johnfrazarjr
@JohnthePooka
Previous Gamescom: Dropzone
Next Gamescom: Full of Stars and Laser Kitty Pow Pow 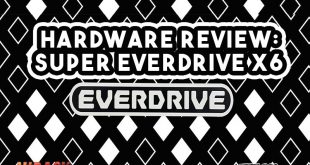