ORA ORA ORA!  It is time to get serious Jojo! Dio has been ruling the world for years and we finally stopped him! However a new threat arises that threatens the very fabric of all dimensions and time. It is time to take it head on! Will you let the Joestars down? Let’s hope not we tackle this adventure in Jojo’s Bizarre Adventure: Eyes of Heaven! 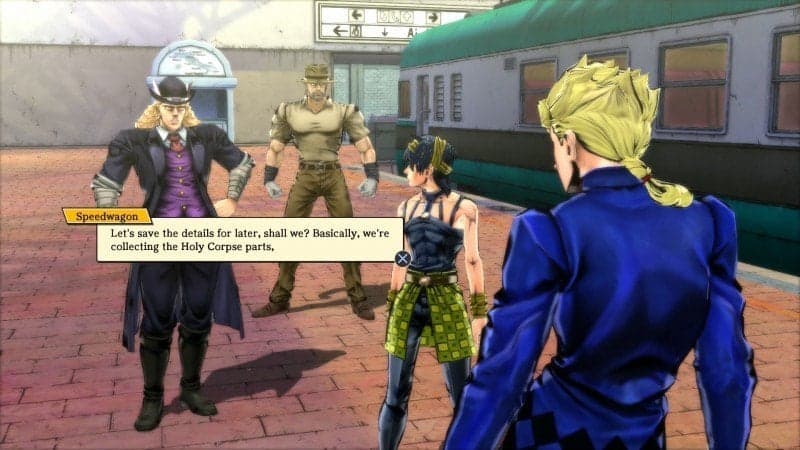 Taking place after the Stardust Cruiser arc from the manga/anime, Dio is finally defeated. However, a new threat appears as a young R.O. Speedwagon approaches the gang after they are attacked explaining that he has been traveling through time and dimensions. He was ultimately lead to this time and believes encountering the Joestars was fate. A new quest begins in search of the pieces of the Holy Corpse. What do they do and why are they important? Well, that will not be spoiled here, as that will bring shame to the Joestars. You must venture with them in this game and find out. 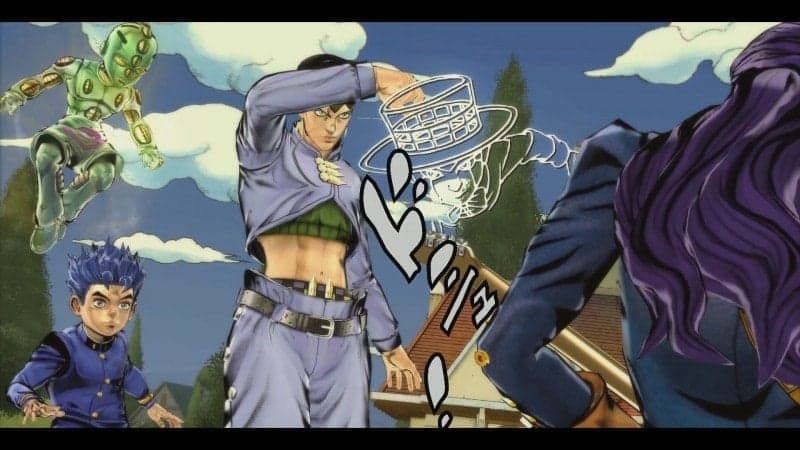 Gameplay consists of two elements. The first aspect is the small adventuring parts. In these adventuring parts, you get a full 3D environment to explore. In this area, you can take part in finding items, speaking to others in the environment, doing revenge battles (fighting previously beaten enemies who come back harder than before), finding holy corpse parts, and progress the story. Not much else there, and some environments are bland.

The Second aspect is combat. Combat takes place in a fully 3D environment where the player can run around the entire area. The player can pick up boxes and other objects to throw at enemies. There are also breakable crates in the stage that provide some buffs to your character (increase strength and defense). Besides that, you get the actual fighting aspect, which while fun seems clunky. 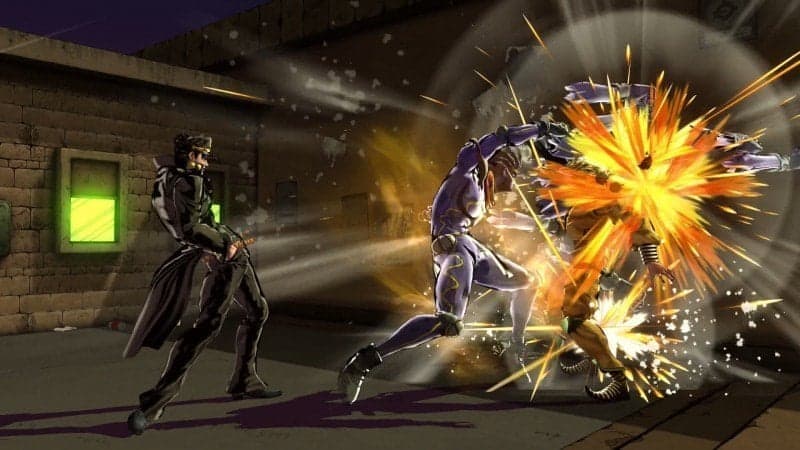 You get the face buttons that each does jump, weak hit, strong hit, and special. You also have the L and R buttons which do other additional attacks and specials. However, being this game is a fully 3D brawler, you will have to utilize these buttons while delivering your attack. You lock on the enemy and attack away. Once you are knocked down or the enemy is knocked down, there is a brief 3-5 second wait time, in which you are literally waiting for the individual to recover. This messes up the flow of combat and the flow of combos.

The camera also is an enemy in this game as well (for me it was pretty huge). You will go into battles in a 2 on 2 aspects. You can be attacked at anytime from anywhere. Sometimes you do not even see these attacks coming. This is where the camera is at fault. You have no indication, it just happens. While I played, I found the combat can be pretty easily abused too. Once you fill up your dual combo bar, you just abuse it. While the combat is fun, the clunkiness is definitely there. It needs to be polished up. 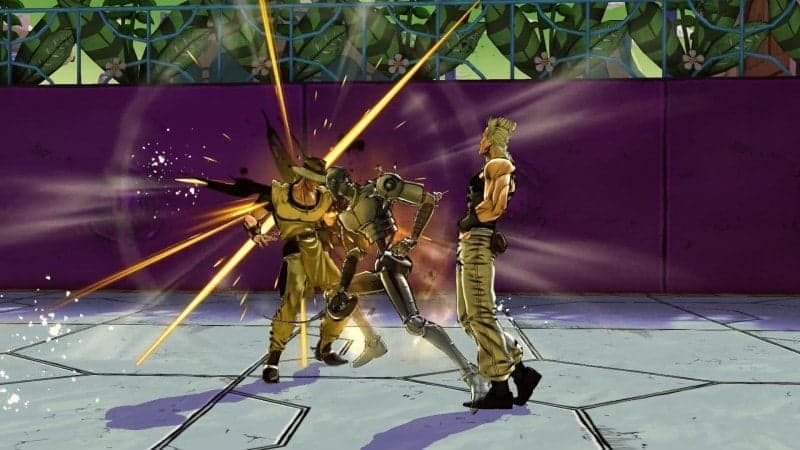 Visually, this game looks impressive. It feels as if you are watching an actual episode of the anime. The animation style fits with the theme of Jojo, which there are no issues with. Environments consist of key places from the Jojo series and they have been faithfully recreated in this game.

Audio is also well done in this game. Every character has their favorite sayings, such as Old Joseph’s “OH MY GOD”, or the “ORA ORA ORA”! In addition, the musical aspect fits Jojo really well too. Once again, no complaints. Below is a sample. 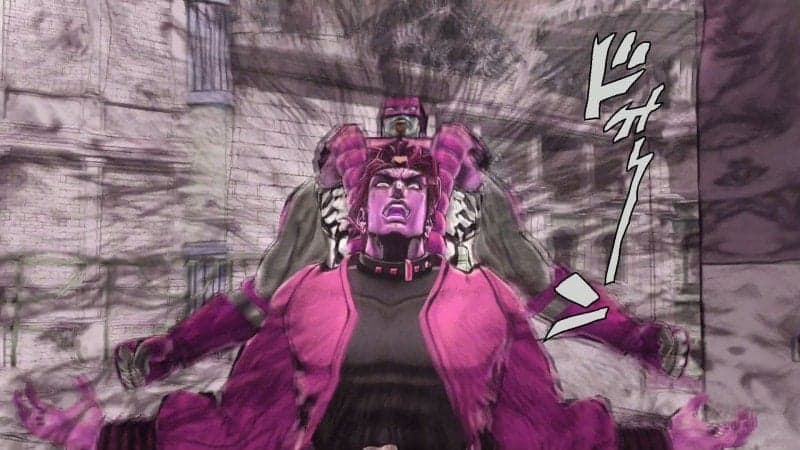 There is so much to do, so much to unlock in this game. There is a ton of replayability. This also plays into the fun factor (which is why I put them both together here). This depends on how big of a Jojo fan you really are. If you are a huge fan, you will find yourself working to unlock everything. If you are an average fan, you will find yourself just finishing the story aspect. The fun here depends on how dedicated to the game you are and how much you can handle its repetitiveness. You will be fighting… a lot. If you can bare with the clunky combat and awkward controls, then it is for you. Otherwise, you will find yourself just going through to finish the story and may not give it a second visit. 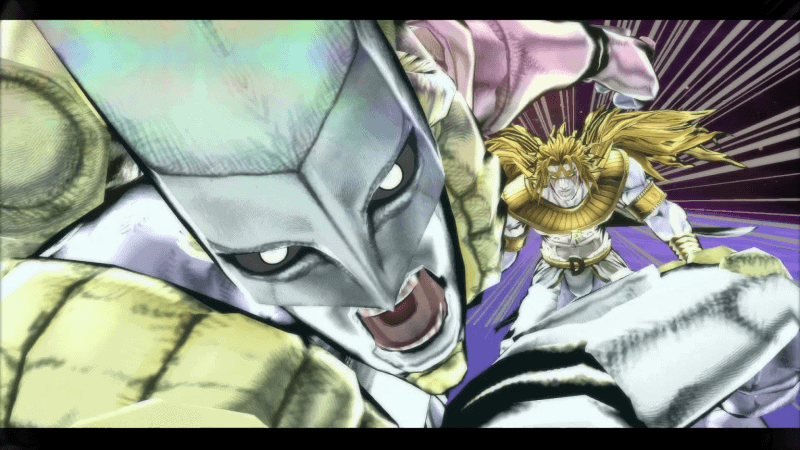 Jojo’s Bizarre Adventure: Eyes of Heaven is a fun game. It is a game made for Jojo fans, by Jojo fans. However, it does have some obvious faults. With an awkward battle system, clunky controls, and very repetitive gameplay, you will ask yourself why to continue beyond what you want to accomplish. In terms of being a Jojo fan, however, this game deserved better. I found myself struggling to finish. I did, though, and I feel as if there is no reason for me to continue with it. Let’s hope that with the next Jojo game that they learn from this game. They take the strengths, improve them, and fix the weaknesses. 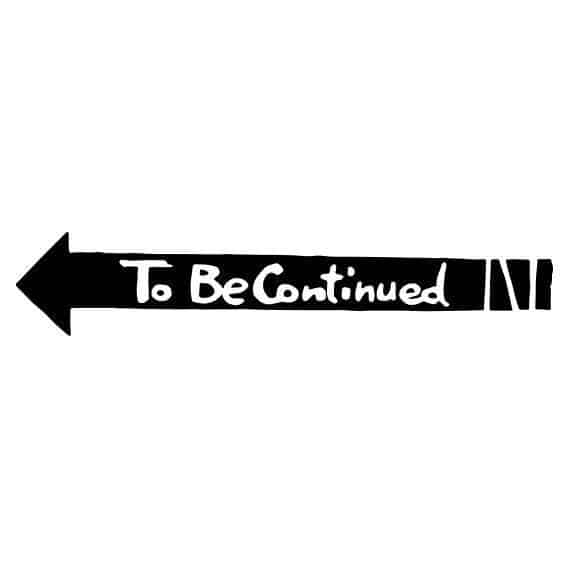 That is all for this review, Until next review, Mgs2master2 out!

A gamer and jack of all trades. I enjoy many things, but overall just enjoying life. Hopefully, I can add enjoyment to your life through my articles or interactions.
@mgs2master2
Previous Our Review: Adventures of Mana for the PSVita
Next How to get the whitelist hax on the PSTV before updating & activating it