What is Ai.Frame? Well it is a miniature open-source humanoid robot. It’s flexible, customizable, and pre-assembled; that’s how it’s described on Kickstarter China project. The Ai Frame has already surpassed its threshold (rather low actually) $ 5,000 with at least 21 days before it expires. The image you see at the beginning, is just one of the three proposed by this Kickstater project. 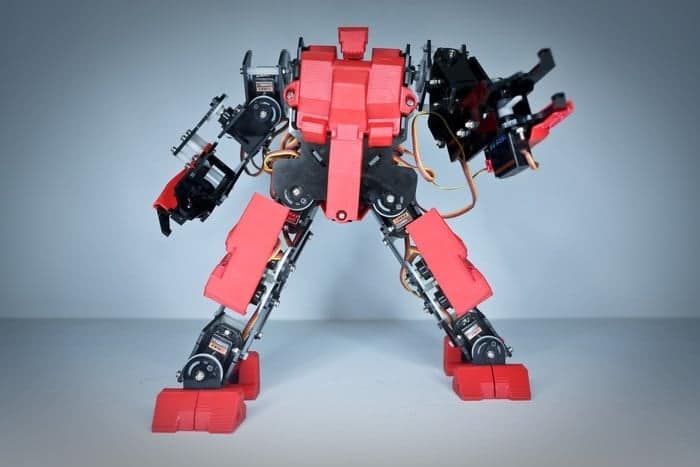 The Ai.Frame robots have a 16 degrees of freedom, which( the Apollo model in its two variants/the model Rex 9) are able to walk, stand, dance, fight and can even shoot a nice gun with elastics. There are 10 pre-programmed movements, but you can have fun creating up to 300 different movements and thousands of combinations.

The control system involves the use of multiple platforms: a controller adapter thanks to Arduino, a PC, smartphone or  Android/iOS tablet that can connect via bluetooth. Even via a wearable device that translates your movements in real time!

You can book various versions of Ai.Frame in different ways: it is rather complicated models, which include no less than 109 pieces (Rex 98) and 12 segments of the outer shell. Precisely, the reason to go with a pre-assembled model.

For $ 179 (+shipping) you can take home, Rex unassembled including various gadgets and controller adapter for the Arduino. For $20 more you can get the Apollo model already assembled. It’s the model you see at the top of this article, which starts from $ 269 and up. The first shipments are scheduled for this December. For more details, we leave you with the intro movie of the project and a link to the Kickstarter page for all the details.

I dig the web to find always fresh news about the tech world, from gaming to smartphones through pc and reviews. I've grown with bread and videogames since the first time I saw one.
Previous Monster Hunter Freedom Unite Available on the App Store
Next New Credit Card Size PC on the Block & This One Packs a Punch.