By popular demand, I’ve decided to release my little rop script I created for PSVita’s on pre-2.00 firmwares. The reason I created this is mainly for practice and learning purposes. After I somehow got the attention of the Vita scene and seen the feedback from everyone on Twitter, the YouTube video (which has over 2k views now), and even private, I figured some people might be able to make use of this. 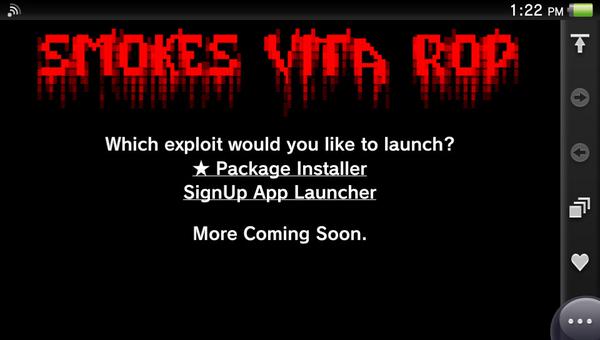 It would seem that I may have portrayed myself to be the only person involved in this. So, I would like to thank Davee for all his work to create RopTool & HTMLIt along with giving me tips on RopTool’s syntax. Also there’s Hykem who gave me a brief explanation on how to dissemble modules.

With that said, here’s a short video I made demonstrating how this publicly released launcher works:

This is composed of some php code that will auto detect your firmware version and redirect you to the appropriate page with assorted rop scripts. At the moment, it only supports 1.80 & 1.81 Vitas. I plan to add my rop scripts to this page as I create them. Also I do plan to release the rop code in the very near future.

In the SignUp app, you are actually able to switch accounts without formatting your memory card. After a reboot, it will ask to format the card, but all you have to do is hit no and it will bypass that.

If you are following me on Twitter, you may have noticed me asking for donations. I’ve had a few people that had their doubts about my situation. I would never lie about going broke like I am and really, I don’t like asking for money from people. At the moment, and without dragging this on longer than the main subject of this article, I am still looking for a job. If you would like to help me by throwing a couple dollars my way, here’s the link.