Today’s review is of a product that is something more of an oddity. But when I say oddity, I mean it as in it is odd because it’s out of the ordinary. It’s a product that is something so rare and new, but gives you the urge to smack your forehead and exclaim of “Why didn’t I think of that?!”. Today’s item is the Gaming Edition of the mCable (Marseille Inc.,$119.00) Let’s dive in, shall we?

Upscale your games to 4K or True HD

‘No additional hardware or software needed, mCable is a true plug-and-play solution to instantly upgrade your favorite games. 480p and 720p 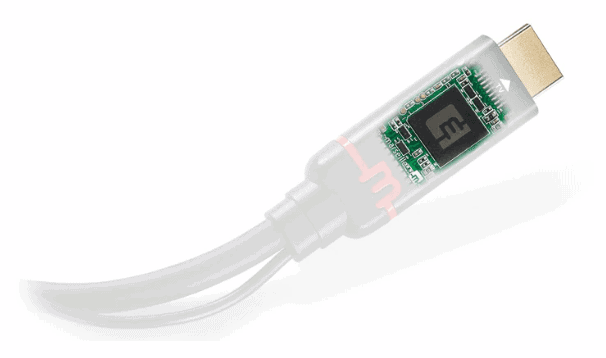 This thing is tough! Normal HDMI cords are thinner than this and have a lot more bendability than the mCable does. I think that this is definitely something that is in the mCable’s favor. If you try to wind this up, you’ll find that you can’t do it as tightly as you maybe could with an off the shelf HDMI cord. I think that the USB cord that comes off of it should also be a bit thicker than it is, but I suppose that that’s debatable.

The plastic along the length of the cord is very durable overall. I couldn’t really twist it or make it split, so this shows us a level of longevity. The same can be said about the plastic that houses the metal plugs at either end. They’re very durable and again, I couldn’t bend them at all. Yet another thing that lends itself to the longevity aspect. One more thing that could be said about the build quality is the connector at the ends of the cord. Marseille Inc. made the connectors so that they’re plated with 18K gold.

The product internally has a lot going on as well. While I couldn’t disassemble the product to look at the internals, they make mention of what’s inside on the box. Within the larger end that plugs into the TV is the brains of the operation. There is a chip inside of the plug that “acts as an additional graphics processor”. I think the key word there is “acts” as they didn’t actually put a processor inside of each cable, but it’s clear that it does computing. It “removes up to 75% of graphics artifacts without sacrificing any game speed”. What it means by that is that it does the thinking at extremely high speeds, transferring roughly 27GB/s with less than one millisecond of latency! 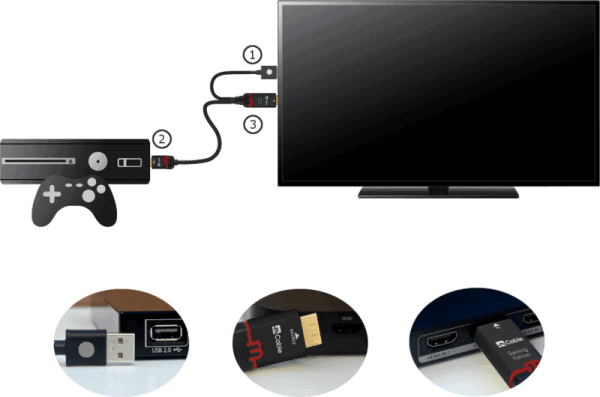 This whole cord is supposed to supply a contextual anti-aliasing to the game that you’re playing. By their definition, that means, “Not all AA (anti-aliasing) is created equal. Most techniques cause a blurring effect in graphics, especially on the sharp edges and small textures found in gaming content. mCable doesn’t suffer from this blurring problem. It has a proprietary CxAA algorithm created specifically to enhance and repair video game graphics. mCable analyzes the placement of every single pixel in context to the entire image and then adapts the pixel to the appropriate edge and texture within that image. This creates a natural smoothness with high-resolution details, giving you an unbelievably realistic gaming experience.”

So what does that mean realistically? Well, let’s start with the compatibility aspect of this before we go into the visual aspect. This is titled the “Gaming Edition” of the mCable. That means that any video game system that you have that has an HDMI port on it, this will work with it! There is also a “Cinema Edition” as well. Funnily enough, if you watched my unboxing video, you’ll notice that the boxing states that this also works for video. So I’m not certain that you need to buy the Cinema Edition.

Conversely, I’m not certain that if you buy a Cinema Edition if you would need to buy the Gaming Edition to be able to play gaming. It could very well be a marketing tactic. But my guess is that the Cinema Edition has other features besides just upscaling the video as this one does. I did test the video and it doesn’t seem to be any better than my current 4K HDMI cord as it’s already as high as can be. But it does make 1080p a bit better looking and it makes DVD movies look as well as they can.

With regards to the actual improvements in video games, you’re about to see what I’m talking about. In the video below you’ll see both standard gameplay on my XBOX One S followed by enhanced gameplay with the mCable. I mess around in Just Cause 3, Danger Zone 2, Soul Calibur II HD, and the XBOX One main menu. What you’ll find in the mCable footage is that everything seems to look a bit more like watercolor paintings than jagged graphics. Which is not bad by any means, but it’s something that you’re going to have to decide if you like it or not. My review of this product probably won’t help you like their process. What it will do though is make you more aware of their process.

Now, the anti-aliasing is going to be more noticeable in games that look worse by default. Games that are already highly polished have little to no room for improvement as they don’t generally have jagged lines and such. Before watching the video, please note that I did not test the PSVR aspects with this cable as I already saw it in action at E3 and wanted to see how it affected HDTV displays only. But just know that the improvements are crazy good on VR, so if you wanted to get it for that, do it. It makes the VR experience much smoother, thus reducing eye strain.

Apologies for the lackluster recording that follows. I thought I had resolved the issues with my capture device. So naturally I didn’t look, thinking that all was fixed. However, you can still very much see the differences if you’re watching on a cell phone or tablet. Additionally, there are plenty of comparison videos on YouTube that exceeds mine to prove that the mCable looks great.

There are some last few things that I want to mention here before we wrap up. This thing obviously isn’t a perfect solution, but it is a solution. It doesn’t have a vent so it gets warm, but not hot. I do feel that it’s great they give you three, six, and nine feet options. I think that it’s a bummer, but logical that it has to have its own power source. Although on the other side of that same coin, it’s great that the USB cord is about 90% of the length of the HDMI cord, making cord management easier.

Great build quality as we talked about. I couldn’t really find anything to complain about in that regard. This, in my opinion, is the end all, be all HDMI cord for those who like to play older games and want them to look less jagged and more smooth overall. This would couple well with the Pound Link Cables for Genesis, SNES, Dreamcast, Original XBOX. I bet there are even more uses for this product that haven’t even come to light yet. .

It’s definitely a great invention, I’m not confident of its price point though. Everything is great about it, but I just think it should at least be below $100 USD. I’m sure as time goes on, they’ll be able to bring the cost down. Or at least add more and more features to it. Or maybe make them a combination Gaming and Cinema Edition, warranting a $119 price point. If you want this product, but want to save money, just buy one mCable and an HDMI switcher and put the mCable on the tail end of the switcher. That way you save a lot of money. 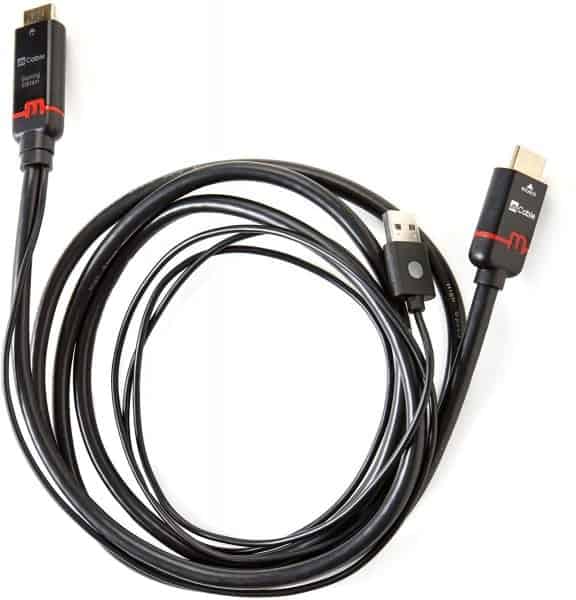