There are simply an innumerable amount of headphones and audio options for cell phones out there in the world. From corded to wireless the options run the gamut. Today we’re going to be digging in deeper with one such option. We’re looking at the Spearhead VR BT ($99.99, 1more) to see if it’s viable, user-friendly, comfortable, built well, and is worth your time and money. Does it work with other Bluetooth options or does it only really work well on cell phones where it’s being advertised for. We will find out! 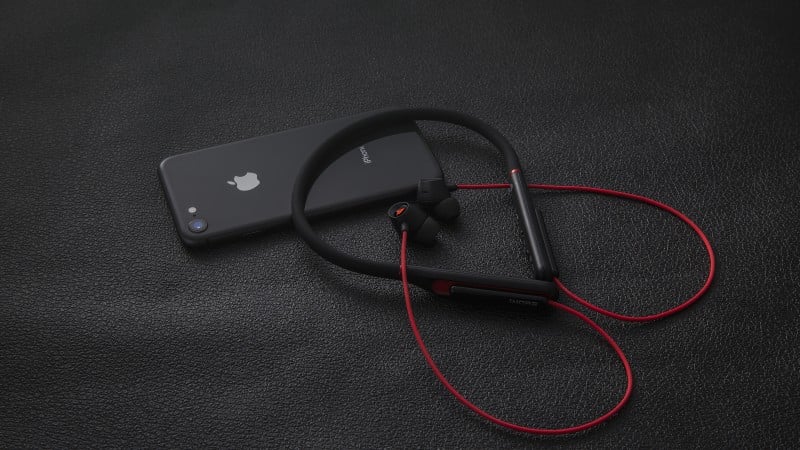 The first thing that I did was test the audio from the dual-driver headphones using a YouTube video that tests tons of variables of your headphones. But yeah, these have great treble and amazing bass. There really is no denying that. The sound passes properly from the left to the right ear as it should in songs and shows and games that are produced that way. The microphone performs fantastically as I was able to have conversations or record voiceovers for my YouTube videos with this. It’s not nearly as fantastic as having a professional microphone by any means, but it does get the job done in a tight spot.

Additionally, this has environmental noise cancellation through the microphone. This basically means that your headset is using your microphone to hear outside noise and making certain that your headphones are blocking it out. I don’t know how the technology works exactly, but all I know is that in a room of basic sounds, I couldn’t hear any of it. It obviously doesn’t apply if you’re in the middle of a football game with screaming fans. The ENC works well within reason.

I also tested the 35 feet range that it said the headphones had using Bluetooth 4.2. This is the part that I’m very happy to report upon. Because, yes, it definitely does have a range of 35 feet. But then I kept walking and I saw that I got much more than 35 feet. I got about 55 feet away from my iPhone before I noticed any kind of a crackle. So that was the bare minimum, but I kept going and found that I made it 60 feet and noticed if I stood still at that point, I wouldn’t lose the signal.

Moving around at 60 feet kept breaking the signal of course. When I moved out to 65 feet away, it didn’t matter if I was moving or not, I still got crackles and breaks. When I got to 70 feet, which is double the marketed distance, I had no signal whatsoever.

I am also happy to report the question that I had in the video I made about the headset requiring an app is not the case. This paired up unbelievably easy to my iPhone within seconds. The instructions are incredibly straightforward and the headphones even tell you that they are or are not synced by giving you a little message. I’m not certain if that is an iPhone thing or a 1more headphone thing as I have no other Bluetooth headphones to test that with.

I can also concur that the 10-minute fast charging really does work as advertised. I’m not certain exactly if it is for three hours of use or not because I’m positive I got a bit more out of it one time and a bit less another time. Maybe what we have advertised to us is an average time of 3 hours. Because I would definitely agree wholeheartedly with 1more if they claimed it was an average time. If they had made the claim that is precisely 3 hours, I would have to see the data to back that up as I wouldn’t believe it. But that’s just using the fast charging. If you charge it for the full hour, you will get at least 6 hours of time out of it.

There are other smart, fun little features. Mainly the LED custom lighting on the outside of the earpieces. They can pulse like a heartbeat, they can stay constant, they can be completely off, or they can have an in and out wave; like a breath. These are easy to mess around with and by default, mine were on breath, which I rather enjoy. But you can customize it however you’d like to. Red is also my favorite color, so I’m glad that that’s the color that these come in.

I also think it’s great that they included other insert sizes for ears as well as a carrying bag. There are plenty of reasons for extra inserts. Besides the fact that everyone has differently sized ear canals, you’ll also find yourself losing some. So it’s good to have some as a backup. The carrying bag is there for when you’re done at the gym and need to keep track of them as well as the extra inserts.

Lastly, these things are incredibly comfortable. Whether you’re wearing them around your neck and you’re running or just riding a bus. Further, they feel great once you have a size of ear insert that works the best for you. The material that they use for the inserts feels the same as the collarbone neck piece. The best thing about the neckpiece is that it has the ability to open up widely no matter your neck size, and then it goes back to its original shape. 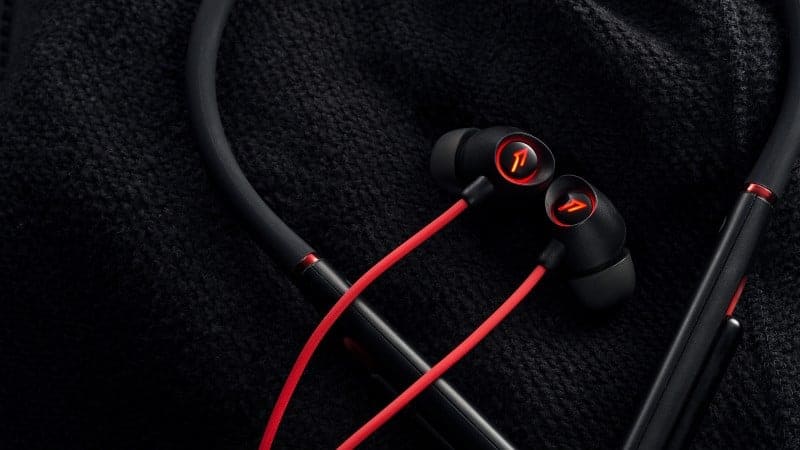 There aren’t a whole lot of negative points about these things to bring up! But the ones I could think of may still be deal breakers to you all, so I’ll still mention them. First off, I truly wish that I could retract the cords inward either when no longer using it. This might also be useful for when smaller people want to use them and don’t need all of that length. I understand that that would make these larger in size, but I also think it makes them look less visually pleasing with all of that extra cord dangling.

Next of all, it does say VR on the box, but I couldn’t find an instance where having sound pass over me from behind to my front or something was something that these headphones would do. It says on the features that there is 3D immersive sound, but I really couldn’t find that in anything that I tested. I know that there may be games that have some kind of immersive sound built into them, but none that I could find.

Unless the headphones really don’t work as advertised? But I don’t personally believe that for a second. I think it’s just more because iPhone games unless they’re high price, stick with a stereo output as the phone and headphones by default are simply stereo. I could be wrong about this, if there are any games you think I should test, let us know down in the comments. But this as a whole is hardly a drawback, at least to me as a user.

Then there are the button shapes. I understand that maybe by having a plus shaped button and a minus shaped button you can evoke the idea of gaming with the Switch. But this doesn’t really work as well. I have to really feel for the buttons each time and sometimes I need to press one or the other quickly. I would’ve preferred three different sizes of circular buttons or three different solid shapes like circle, square, triangle.

The last two bummers that I could find I’ll just lump together into one paragraph. I do think that having a USB-C option on the 1more Spearhead VR BT would be a more logical option. It’s just becoming the norm all around; especially with gamers. Lastly, while I like the red (a lot), I have to think that it’s going to be an issue for someone out there. I truly think that 1more should have some other color options. Like a white accent and a white LED in the earpiece would make a nice, clean headset option. 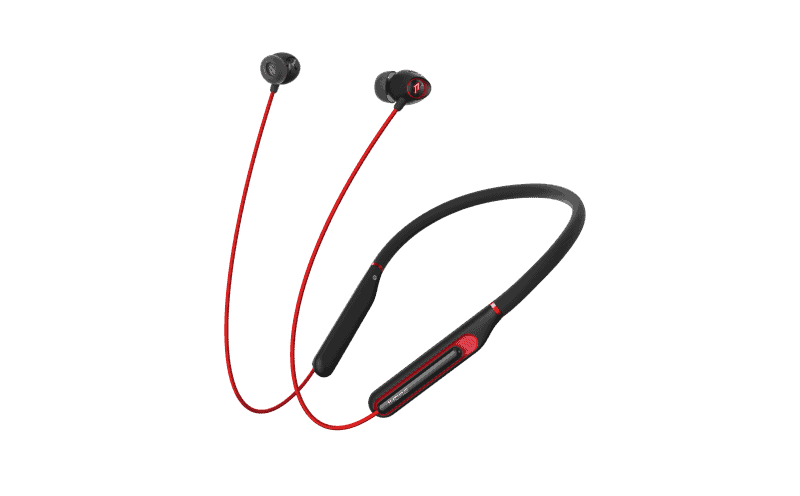 I may not be the biggest audiophile out there, but I do love music. And I love it when music sounds as good as it possibly can, for a dollar value that is. I’m sure that headsets in the thousands range sound multiple times better, but I couldn’t even guess what that would sound like. These sound so good, it’s like meeting the love of my life and then being told that the future holds someone better. I wouldn’t believe that there is anything out there better than these, especially only at $99!

Yes, there are some drawbacks. But only because I was told by the box and advertising that there was something VR related about these. I mean maybe it isn’t the sound moving all around me. Maybe it’s just that you could potentially wear these while using a VR headset, but the box stresses phone use, not console use. These still work great for games, even better for movies and music.

It’s worth noting that the real takeaway that I got from the Youtube video that I used to test the headphones was that these perform unbelievably well. But I also want to point out that the reason I could tell that is because I have great hearing. So please remember that good headphones are good unless you have bad hearing. I’m not certain I would say to buy these if you have bad hearing. It may be worth staying with a lower cost option that performs decently, like Skull Candy products.

But I digress, they’re a great option for those of you who want absolute quality at an absolutely affordable cost. These have become my daily drivers now and I really wish that the Switch allowed for Bluetooth audio, these would be used on there by me!

Interested in the 1more Spearhead VR BT? You can find them on the 1more site right here.