How to host the PS4 Exploit for FW4.55 right from your PC

It feels like exploits for the PS4 are just coming out of the woodwork with the latest WebKit exploit that work on FW5.01/5.05/5.50 beta3 and FW4.55 just a new exploit just like FW 4.05 used to be but this new exploit is much stabler and you’ll be able to play a few more new games that need FW4.55. There already a few new PS4 websites popping up that will load the payloads for FW4.55 like ps4.editzz.net that host everything for you.

If you like me I like to host everything myself on my PC so no update can very happen. Now, Al-Azif has released a PS4 exploit host program that works on Linux, Windows and even a Raspberry Pi. This program is a great tool for anyone wanting to host the exploit and not have to worry about your PS4 touching the internet. 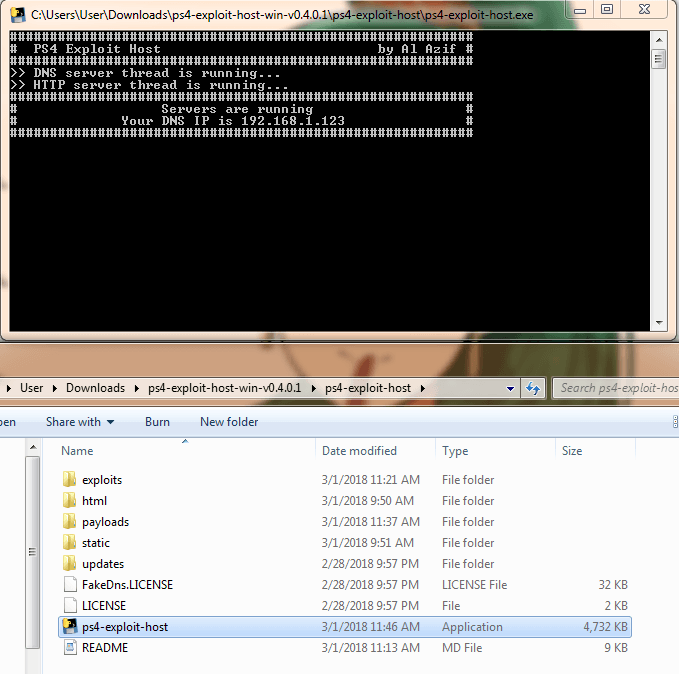 This is an easy way for anyone to host their own exploit for the PS4 on their LAN. features include:
– Hosts your choice of exploit
– Sends your choice of payload after a successful exploit
– Blocks PSN domains from resolving (Stops accidental updates and block telemetry)
– Can serve the 4.55 update to your PS4
– Works on just about every platform.

How to run (Run Locally)
1. Download the files..
2. Double-click the executable (`ps4-exploit-host.exe`, `start.py`, etc). If it starts with no errors, note the IP given
– Alternatively run it from the command line (`ps4-exploit-host.exe`, `./ps4-exploit-host`, `python start.py`, etc)
– If you are not rooted when running on a non-Windows machine you need to use `sudo`
3. On your PS4 `Settings > Network > Setup Network` to setup a network. When you get to DNS Settings select `Manual` and set the Primary and Secondary DNS to the IP address you noted above.
4. Make sure the PS4 is on firmware version 4.55 (`Settings > System > System Information`). If it does not use the jump to the “How to use the Updater” section before continuing here.
– If your firmware version is higher then 4.55 you are out of luck there is no public exploit available and you cannot downgrade.
5. On the PS4, go to `Settings > User’s Guide` and select it. The exploit should run and there should be output on the script window.
6. If applicable for your exploit the script will prompt you to choose a payload to send. You may send any payload located in the `payloads` folder.
7. When done use `Ctrl+C` to cleanly close the application

I recommend that you read the readme file that comes with the download as it even talks about using a raspberry pi to do this with and even has some answer to troubleshooting problems with firewalls and more.

I like to get everyone the right info and I like to help others get the most from there electronic devices. I enjoy playful cleverness and the exploration of technology. My Motto: You own it, you can do whatever you want with it.
@HackInformer
Previous Support PixelGirl’s 24 Hour Charity Gaming Stream!
Next Review of the Powerbase miniFM for Genesis and Mega-drive!