Review: Implosion for the Nintendo Switch

Hey, guys, Gaarasaiyan has returned finally for another review. I want to apologize for my very long absence to those who enjoyed reading my reviews. I went through a lot between February and present day which included losing my right leg as well as numerous other occurrences. But I’m finally in the home stretch to recovery it seems so that’s a plus. Anyway, enough of my sob story, let’s get to the review, shall we? 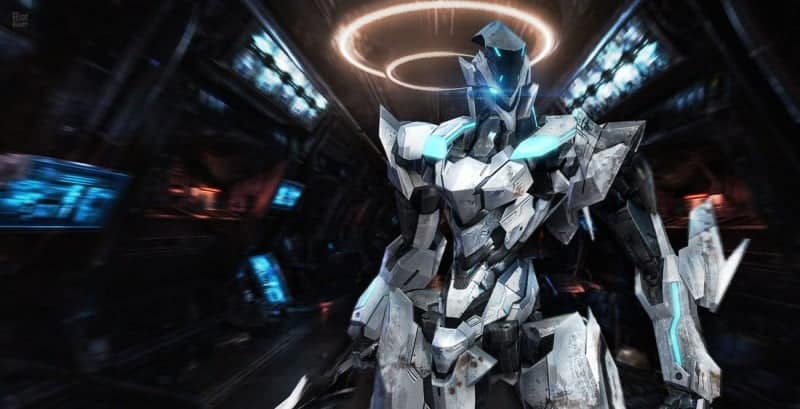 The game under the microscope today is implosion for the Nintendo Switch. It’s a rather straightforward game so I won’t be going into extreme detail like normal. Let’s get to it, shall we?

The game is, as I said, rather straightforward. I won’t spoil any of the story since I rather enjoyed it, so I’ll streamline this. You play as the pilot of a robot, a mech if you will, who has a mission that’s told through still art cut scenes which add an anime-style feel to the game. The gameplay resembles that of old school beat em ups. Or for those that may be of the newer generation & didn’t play those old SNES or Sega games of my youth, it’s basically that of Dynasty Warriors or Samurai Warriors. You have a combo chain that you can extend via normal & heavy attacks. The enemies are rather grotesque creatures that, upon meeting the blades or firearm of your mech, spew blood all over the place. It’s rather satisfying taking down hordes at a time. Some stages though, you’ll encounter bosses. These are not your average pushovers & should not be taken lightly. Stick & move is your best option here since if you get careless these creatures will decimate you without hesitation… so be careful. 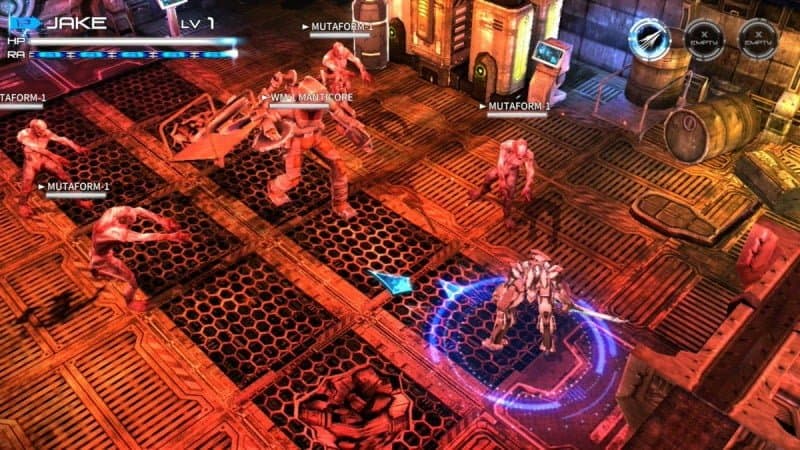 The game’s plot is in a linear form. You beat one stage & move on to the next. As you go you’ll unlock new cutscenes that tell the story as you move along. Each stage gets progressively harder as well so right when you think you’re a master at the game and it’s too easy surprise, surprise, you’re WRONG! I like this increase in difficulty since if it stayed the same I’d have to say the game would get old quick. There is only so much of a good story that can compensate for simplistic gameplay after all. Later into the game you’ll also run into bosses you’ve fought before as normal enemies & often two or three at a time so tighten those cheeks pilots, you’re in for a fight! 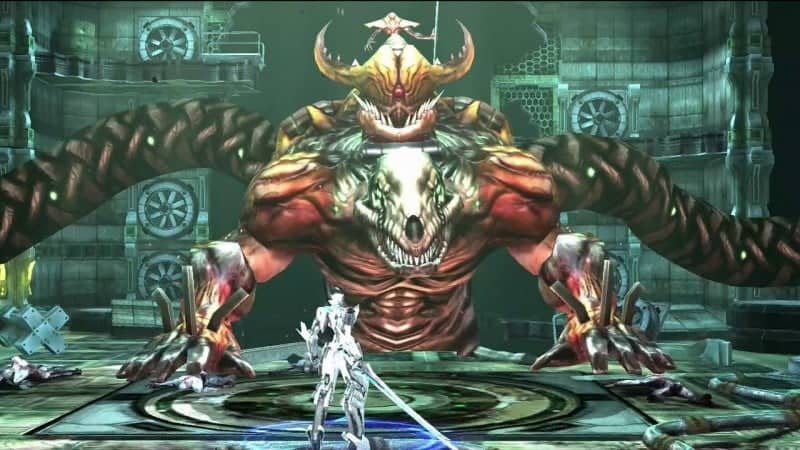 As you complete each stage you’re greeted with a rewards/completion screen. It’ll detail how well you did, what treasures you picked up in the level, as well as what special missions you completed. Each stage has these “conditions” where, if met, offer up some nice rewards. You’ll also earn badges which can be used to unlock other awesome things. All these “unlockables” are applied to your mech to further enhance it’s abilities, increase certain stats while sometimes decreasing others, or offer up new weapons. Earn enough badges for completing these “missions” & you can even unlock a new mech to use. You know, in case you get tired of rampaging through the hordes of enemies in your old rust bucket mech. 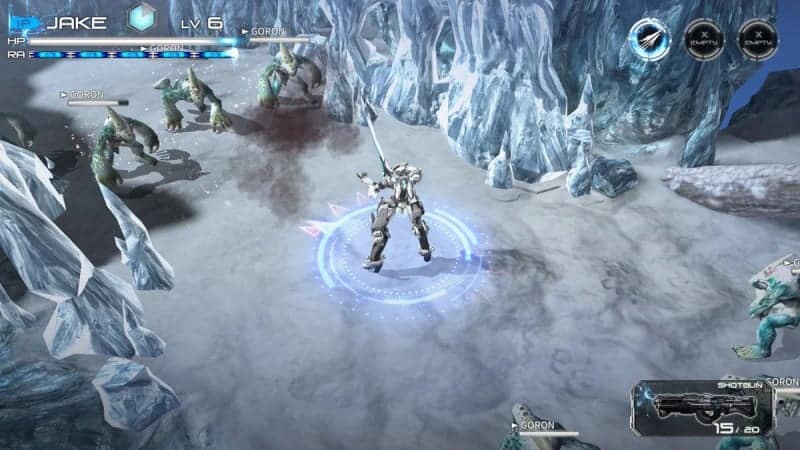 There is another game mode which I believe I unlocked after completing the first chapter of the game. Here you’ll play as a totally different character with a totally different skill set as well as their own story. He even has a nice & little, but mean, robotic dog companion that’ll help tackle the many different enemies you’ll encounter. You’ll need all the help you can get too, seeing as how you’re facing these enemies without the use of a giant mech. I found this mode to be a little harder so prepare yourselves is all I’m going to say. 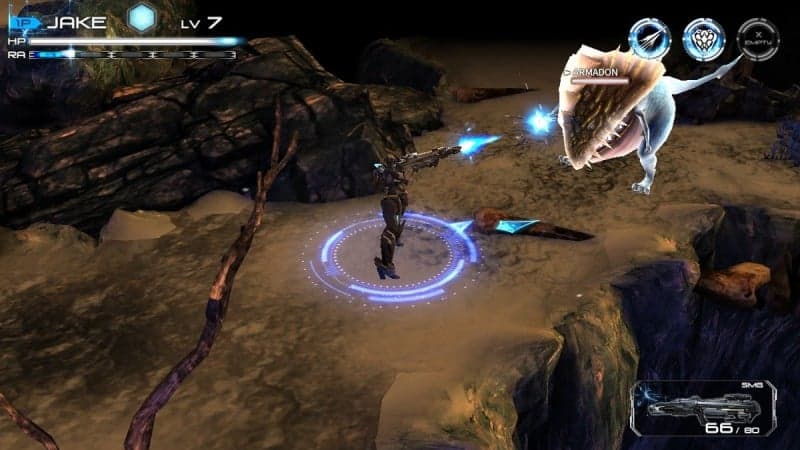 There isn’t much to the game other than it’s two gameplay modes. The special missions I mentioned that each stage has offers some replayability if you’re a completionist like myself. Other than that all there is to unlock are the cutscenes and I think an art gallery, but don’t quote me on that. I only enjoyed the two stories & didn’t explore much else. There could be more than I know about, but for me, by the time I got done with the stories, I’d had enough of the game for my taste. The game isn’t bad by any means but the story isn’t the greatest I’ve experienced & once I’d completed it, I felt fulfilled enough to move on to other games. So on that note, I should give this a rating, shouldn’t I? Implosion for the Nintendo Switch gets a 7/10 in my book. Definitely worth playing but I’d try & wait for a sale. At this time I’d like to thank our friends at Play-Asia where I get my online game cards for Eshop as well as PSN. They seriously have an awesome inventory of cards and games, as well as other goodies. You should check them out, & hey, while you’re there if you find something you like, use our code: Informer to save a few bucks off your purchase. It may not be a ton but every dollar counts, am I right?

That’s all from me for now, so until next time,

Been gaming since I was 3 years old. I beat SMB for NES when I was 3 and continued to conquer games from then on out. My favorite console of all time would have to be the SNES. My favorite game would be a tie between The Legend of Zelda: A Link to the Past and Metal Gear Solid. I used to run support for Hyperkin's Game Genie for PS3 product on their official forums. I also used to write codes for the device. I'm now with another company on another device but I haven't been as involved as I'd liked to be. Time restraints & whatnot. I hope to continue my involvement with the gaming world in any way possible. You can find me on twitter @Gaarasaiyan, on facebook at facebook.com/Gaarasaiyan, and on twitch at twitch.tv/gaarasaiyan Anything else you guys want to know, feel free to ask.
@https://twitter.com/Gaarasaiyan
Previous Hakchi2 beta for SNES Classic out now!
Next Play “Flog” on Your Switch Right Now! Instructions Inside.