Amazon Italy have now listed the Ezio Collection confirming that the title will launch on November 17.

A promotional image has come to light yesterday by the French gaming site Gameblog, shedding more information on the Assassin’s Creed: The Ezio Collection rumours that were prompted from a Korean Games Rating Board. 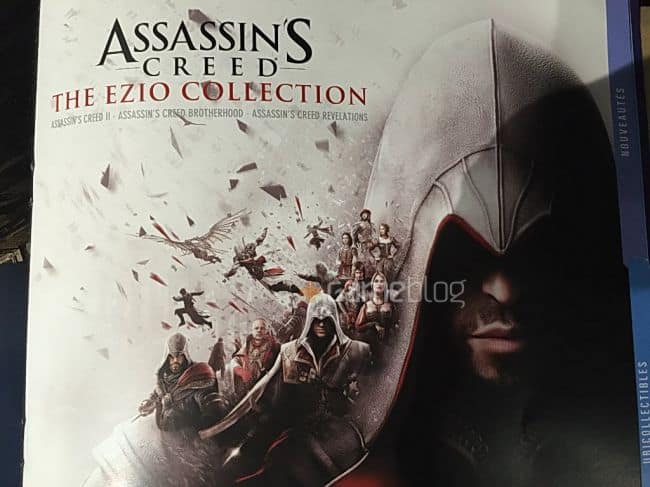 Don’t get me wrong, I’m all for this remastered or ‘up scaling’ of these iconic titles – they have a special place in my heart as some of my most beloved games as well as being universal fan favourite titles compared to some of the other AC entries in the most recent years.

In 2012 however, there was an Assassin’s Creed Ezio Trilogy which came out in November of that year for the PS3, Xbox 360 and PC, so releasing another collection of the games which features Ezio does seem very odd.

In saying that, graphics have made massive improvements since 2012, so having those iconic titles appear on current gen consoles wouldn’t be a particularly negative thing (only to my bank account).

While all of this is still unconfirmed by Ubisoft, as previously mentioned what prompted the rumours were screenshots from a Korean Game Ratings board website that published age ratings for the supposed collection.

According to NeoGaf, the listings indicated that ratings were awarded recently for PlayStation 4 as well as an Xbox One version.

It’s not unusual to have this collection focus again on Ezio Auditore – he is is one of the most beloved assassin protagonists in the series. Aside from his alluring Italian charm, he is one of the only protagonists from the series who has a couple titles dedicated to his story.

According to the report the collection is supposedly going to be available in November 2016 and will cost less than €70/$60.

It makes sense for Ubisoft to release this collection, as they aren’t releasing a new Assassin’s Creed title this year, so this is probably their idea of filling in that gap. while they work on their next title to be set in Egypt for 2017.

This trend of remastering beloved video game titles is definitely a recurring theme as we will see the release the BioShock Collection come out on September 13.

Games like BioShock and Assassin’s Creed have played integral roles in shaping our industry over the past decade, so I say roll on the nostalgia wagon.

For more news on Assassin’s Creed: Ezio Collection and many more collections to come, don’t forget to follow us on our official Twitter accounts at @Hackinfomer and @geestaar74.

I like to get everyone the right info and I like to help others get the most from there electronic devices. I enjoy playful cleverness and the exploration of technology. My Motto: You own it, you can do whatever you want with it.
Previous Suhide: Hide root access from selective apps
Next How to transfer your Vita dumps between your Vita & PC