Welcome to Neopolis, a fresh cyberpunk RTS from BAFTA-nominated indie developer Rudolf Kremers! Let me show you an amazing game guys at Omni Systems Limited have been working on, with a little bonus at the end.

Rudolf Kremers (Eufloria) set off to create an accessible real-time strategy without the overused mechanics of this genre but with deep strategy options.

He created a virtual city Neopolis. “Virtual?”, you may be asking. In the game, Neopolis is just augmented reality – a “globally televised game of e-combat” , where gangs (“grid-runner crews”) fight for the total control over the city. 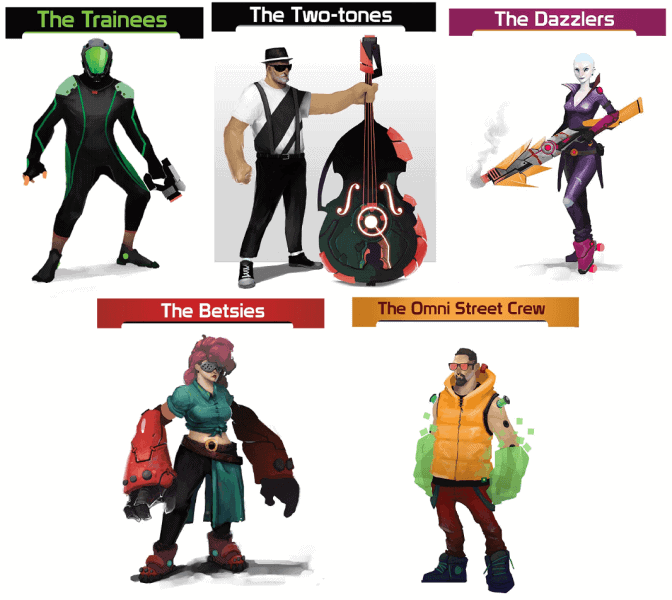 Each crew starts with 15 members/units, whose names are randomly generated. If one dies, other gets respawned in its place with level 1, so losing a high-level crew member hurts really bad. With these 15 units, you must fight other crews (at least at the beginning of the game), defend your HQ (and other buildings) or explore the city. Goodbye, training countless types of units.

Then each crew has an HQ building and special abilities that other crews don’t have. HQ heals your units, is your primary spawnpoint and represent your life points – if you lose your HQ, it’s a game over. 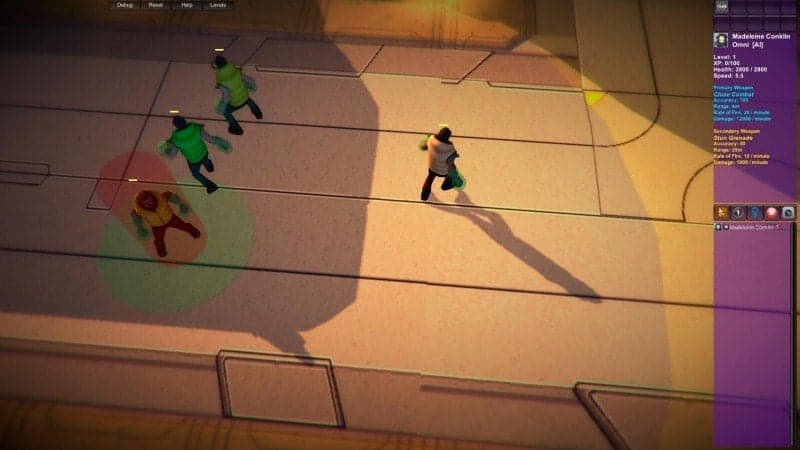 By conquering other gang’s HQ, you gain their crew members (adding 15 units to your total number of units) and their special abilities. Your original HQ remains being your most important building. You must carefully choose which crew’s special abilities will be the most useful to you and accommodate your gameplay to it (choose who to fight first, etc.).

Ultimately, your goal is to gain control over the whole city. Many strategically placed vehicles in the city, like bikes, tanks or spider-turrets (totally awesome) will help you achieve that as well.

That was farewell to training units, here’s another mechanics you won’t see in Neopolis – building bases. You capture buildings (like the ones called PSP Tower or Gameboy Land) instead. Your buildings can then have one of several functions. Also, when you capture a building, you can search through it to find special powers like invisibility. This special power makes the unit that finds her potentially a great scout. You can also put some of your crew members to that building to defend it or ambush other crews that pass by it. Goodbye, construction.

For more, keep on reading. 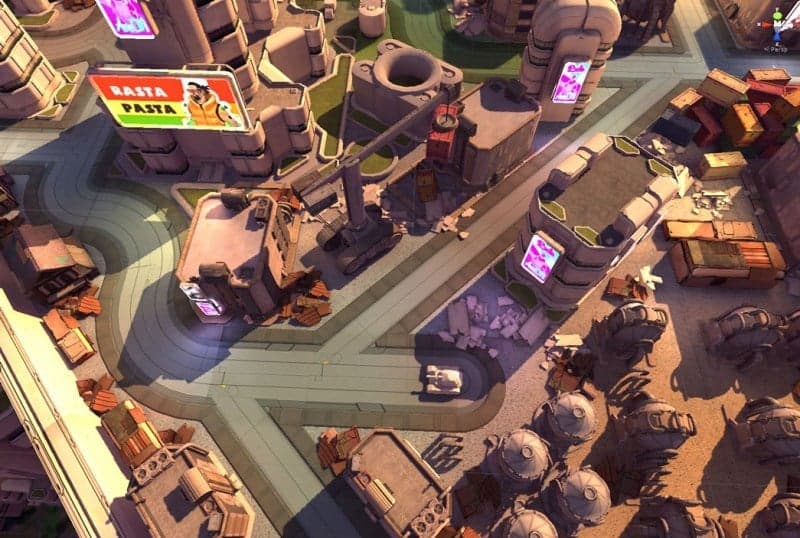 And Neopolis is beautiful: animated HQ’s, hand-drawn buildings’ structures (even slums), dark atmosphere. Every detail is a piece of art. Buildings’ design can also be enjoyed in a first-person view you can switch to as every of your crew members.

Speaking of atmosphere, it’s heavily supported by the ever-changing music. You’ll hear different tunes when you fight, explore, or capture the enemy HQ. “When you capture the HQ, you feel the sense of accomplishment in music,” Neopolis audio designer Mark Day told us. 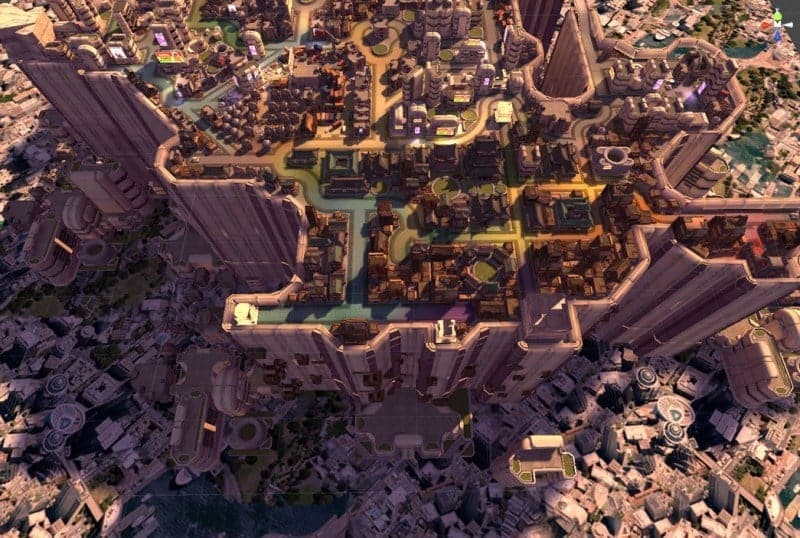 Neopolis will feature both single player and multiplayer modes.

From my point of view, Neopolis looks excellent and I absolutely loved it, even if it was just a pre-alpha. It’s got a long way too go, though. I’ll be keeping an eye on it.

Lastly, here is the promised bonus in a form of the interview with Rudolf Kremers, who was so kind to answer our questions.

1) Why did you decide to do such radical changes to the RTS genre?

A lot of it came out of a desire to continue what we started with our game Eufloria where we developed our own approach of strategy gameplay and learned a lot, which has informed much of what you experience in Neopolis, and is challenging what the genre is. Ultimately, I wanted to design an RTS that would be enjoyed by both RTS veterans as well as players who normally wouldn’t play RTS games, and importantly, look and play great on both console and PC.

2) How exactly is the technology tree replaced in Neopolis?

By completely removing the traditional steps of:

The “game units” in Neopolis are actually amazing “grid-runner” crews, whose HQs you can conquer and whose associated crews (specialist units) you subsequently control. Your crew members level up with experience, which also unlocks new abilities to further diversifies your “units”. You can get really granular in how you then use your crew to your advantage.

There are also various vehicles to be found throughout the city, and searching buildings can also yield powerups. Once occupied, buildings can be re-designated to fit various functions, like a hospital or a dojo. All the complexity of a traditional RTS is available in our game, it is just that we have reinterpreted them, and already integrated our own solutions into the setting itself.

I adore cyberpunk as a genre, and wanted to do something special with it as a setting. I went as far as writing a cyberpunk screenplay set in Neopolis to provide me with a lot of background knowledge.

4) Your previous game, Eufloria, was originally released only for PC and it wasn’t until 2 years later when it was ported to PS3. Now Neopolis is coming directly to PC and PS4. Who came with the initiative to do it such way, you or Sony?

I suggested we do it this way to make sure that as many people as possible get to play the game at launch; we want to encourage a new audience to the RTS genre. Commercially it also makes sense as we can combine the marketing efforts required for two separate releases into one big (and more effective) push.

5) Did you insert any Easter eggs into the random name generator?

Not yet, but there [are] already some fun results! I promise there also be various easter eggs in the game somewhere… 🙂

6) What functions can the buildings have?

In the pre-Alpha demo you saw at Gamescom, they can become hospitals or dojos, but we will expand on that. 🙂 [Note: in dojos, units train and level up; in hospitals, they heal]

7) How many crews are going to be in the game?

Six for now, including the Trainees, who are really wannabees, and have slightly different behaviours and lack an HQ. I personally like the Omni Crew.

8) Are any of the crews directly inspired by, for example, any of the gangs from The Warriors? I can’t stop thinking about The Baseball Furies when I see the Two-tones, or is that just my imagination?

The Warriors movie is a huge influence in various ways, from the music to the whole concept of these specialist crews. Neopolis was inspired from various different sources, including movies like Akira, Blade Runner, to comic books like The Disco Dazzler.

9) Do you plan to do a Kickstarter campaign for Neopolis?

There’s no need! We are fully funded, and proud to be bringing Neopolis to gamers everywhere next year.

10) Would you consider releasing Neopolis on PS Vita?

This is not part of our plans at this stage.

I hope this gave you a glimpse of what could be “the definition of the RTS genre on consoles” according to developer. And when exactly?

By this time (August) next year. The game is going to be released simultaneously on PS4 and PC. Actually, a console-friendly user interface is being work on right now.

Before I log off, I want to thank Tracey McGarrigan from Ansible PR for arranging everything. See you next year. 🙂