Zombies! They are everywhere and in all games. Now they have infected the JRPG goodness of the Neptunia games! It is alright, though, Blanc (White Heart) has us covered in this side story. Blanc, the CPUs, and CPU candidates take on Zombies in  MegaTagmension Blanc + Neptune VS Zombies! Will it be a grand adventure in stopping zombies? Continue on to find out… 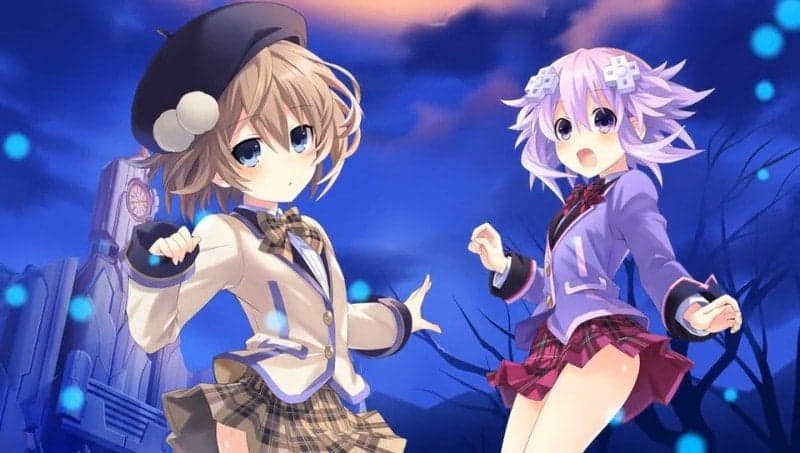 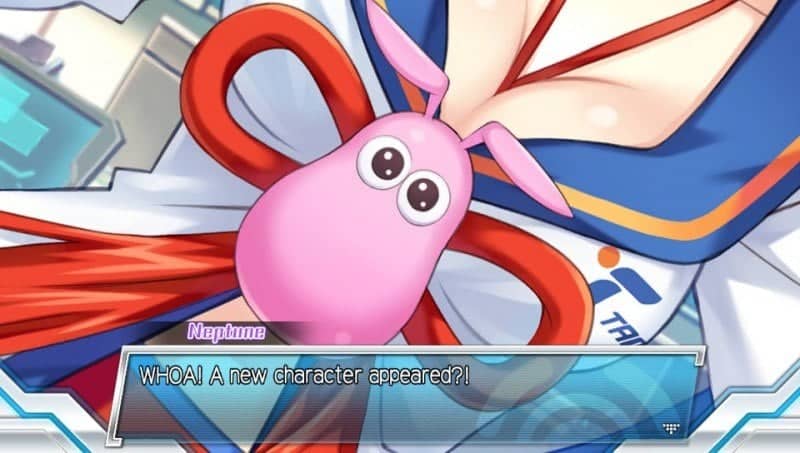 The academy the CPU and CPU Candidates are attending is closing down. Neptune came up with the idea of making a horror film with zombies to keep the school open. Blanc eventually got roped into this as director and writer. However, one fateful day, real zombies began invading the school! The team forms an idea to keep the school open while utilizing the zombie school invasion. How does it work out? The player will find out as the game develops.

Blanc being the lead in this game was also a unique choice. In other Neptunia games, she is usually serious but very dependable. In this game, you see her creative and intelligent side at work, while sharing the spotlight with other characters too. It was well done in terms of story.

Personally, I feel in this type of game, the narrative of the story actually fits well with the theme. Compile Heart took the zombie theme that is in several games and implimented it well to the game. It develops well and delivers throughout the game.  This includes when new characters are introduced and the story development. It retains the Neptunia humor while adding something new to it. I enjoyed it. 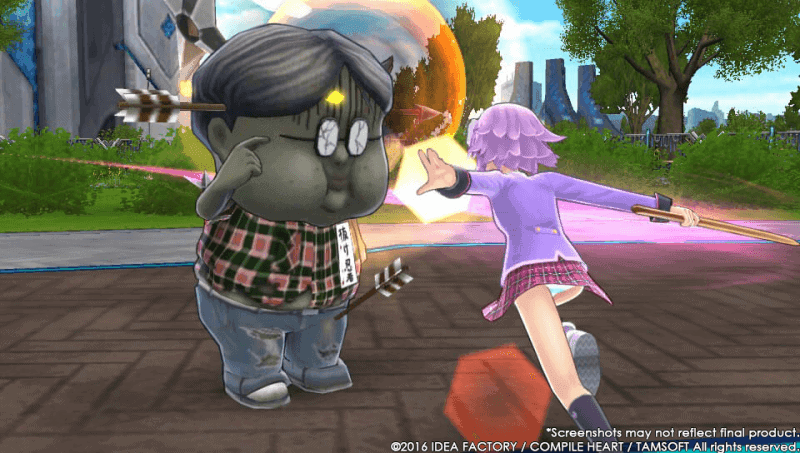 As with all Compile Heart and Idea Factory games, you get the tutorial treatment once you first start. It throws a bunch at you at once. However, the good thing about this, getting to the tutorial requires two button taps no matter where you are. This is a good thing as you can refer to it at any given time. The controls are very easy to pick up so it is not an issue. As a result, this will allow me to do something a bit different in this review. I will explain the feel of everything here. 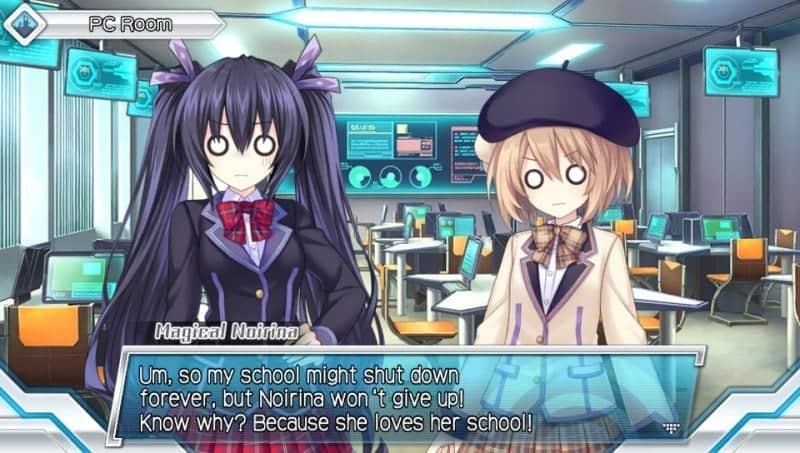 In typical Neptunia franchise fashion, you get cutscenes like above. They are fully voiced over (English or Japanese) with music. It delivers the story as well as the humor Neptunia fans have come to love. I enjoy this. I always enjoyed what Neptunia games did with this aspect of gameplay and interaction. Much more of the humor is here. It is jam packed with it. 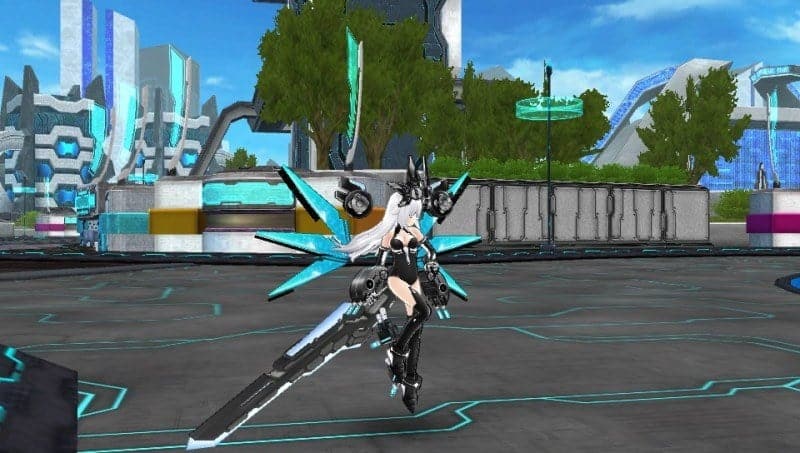 During battle, it feels like a beat em up to me. Think Dynasty Warriors with different franchise characters. You have combinations of buttons to press as you go battle zombies of all shapes, species, and sizes. You do different combinations of moves and it feels very well. It was put together very well and you (the player) can tell that the developers took their time in this game. It is very good. Those who played Hyperdimension Neptunia: Action U will find this very similar as it plays the exact same way. For those who did not, continue reading on. 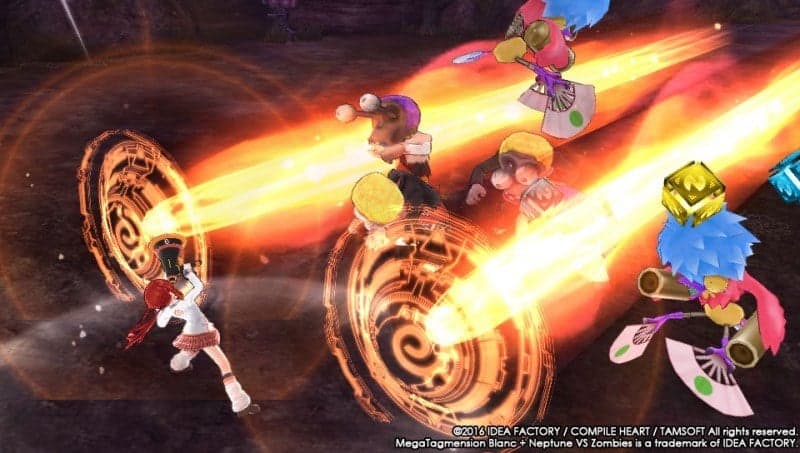 The combos can be linked together by alternating two buttons and it pays off. You also have tag moves, HDD mode, and other combat elements. Once again, the developers took their time on this, it plays very well. I enjoyed it for the most part. However, I feel that the difficulty curve of the game has an opposite expectation than most games. For me, the game began very hard. It took me a while to get through most levels at the start, but towards the end most of the end levels were a joke. It became easy, and this took from my experience as to fun. This is where the game got repetetive to me. 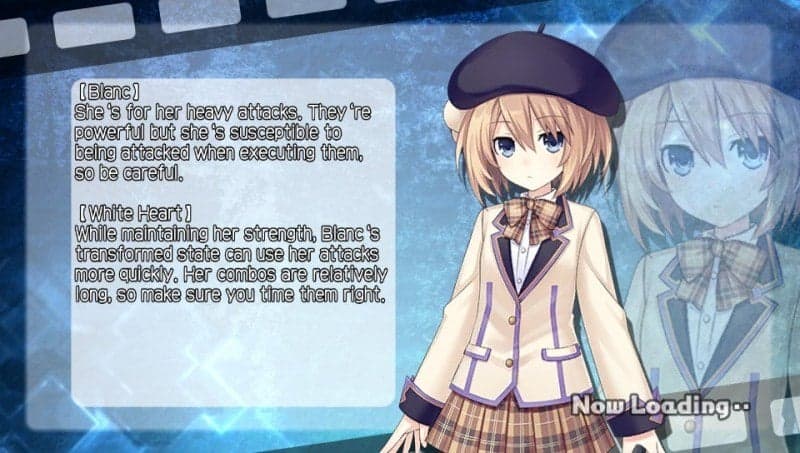 One thing Vita players wonder about is load time. I can happily report that load time is a non-issue. In between the chapter select and actual battle you are greeted with a small information screen (as above) with about 5-6 seconds of loading. It does not deter from the gameplay. For being a Vita game, it is as smooth as butter in my opinion. 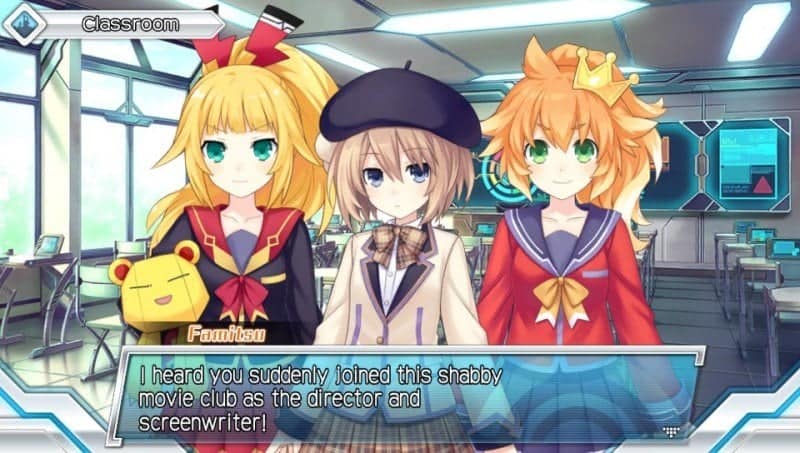 The visuals are about what you expect from a Neptunia game. You get cutscenes (as above) that are somewhat animated characters that have some movement. In contrast, you get the gameplay that is on par with other games of the franchise in terms of the look department. 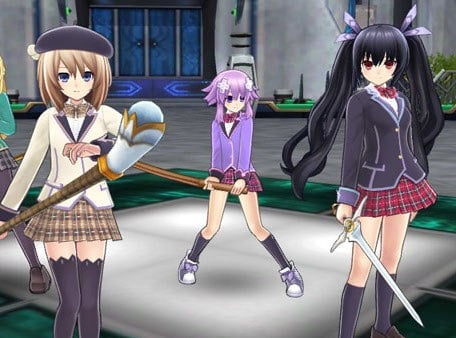 I liked this. No need for a visual change really as this has served well over several games. If anything, there was some improvements in terms of the cutscene animations, as the characters do somewhat move, and in gameplay as it looks cleaner than past titles. One thing fans will take notice of however, the lack of fanservice in this game. There is some, but it has been drastically cut down. I found no issue in this because school girls is enough fanservice to me.

Audio wise, game is also on par with other games of the franchise. That is not a bad thing. It takes some of the theme songs of past characters and puts them in this game. In addition to that, it includes new tracks to the game. It does well and I found it satisfying. I would find myself just turning the game on to listen to the songs in the game itself without actually playing the game. 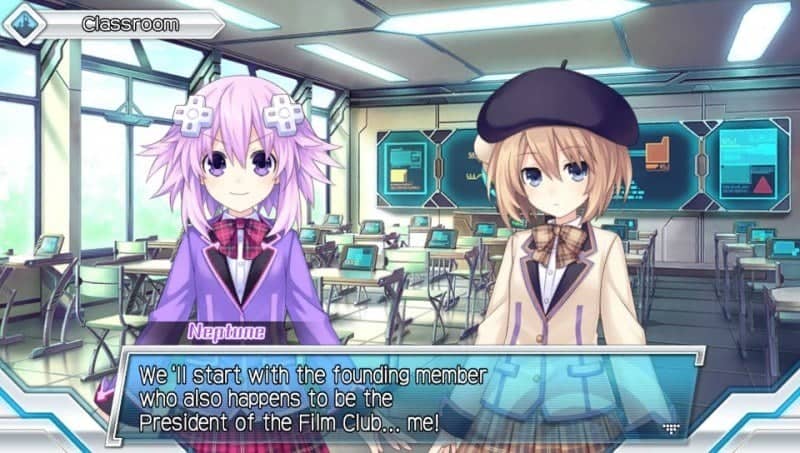 This is where Megatagmension plays differently than other games in the franchise. In other games, you would have multiple endings, and some optional stuff. In Megatagmension Blanc, you get one main ending (With some awesome stuff in the credits and after credit scenes), multiple cutscenes to unlock, and multiple outfits to unlock. Cutscenes are unlocked by pairing your party a particular way before a cutscene takes place. In game outfits and unlocks take place by picking up treasure in-game. 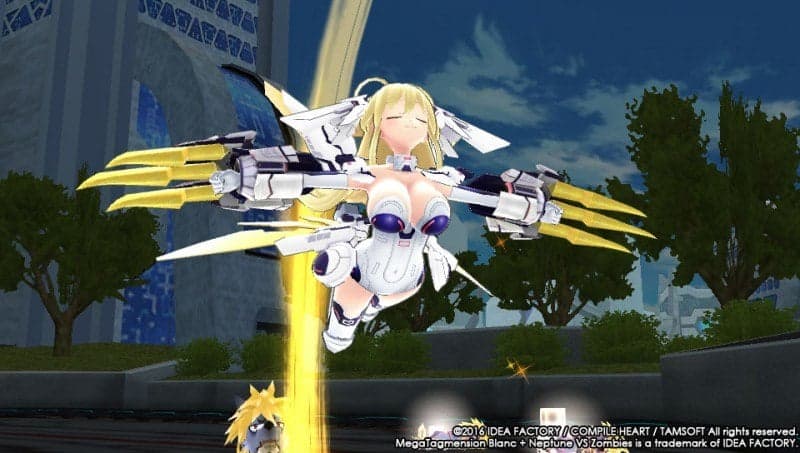 Each unlockables require the in-game treasures. You have to collect a certain amount of treasures to unlock that outfit. This adds to the replayability of the game. However, in the same token, it can make the game feel super grindy. I found myself repeating several levels just to collect the treasures to get outfits. It took time to accomplish this and it got boring. 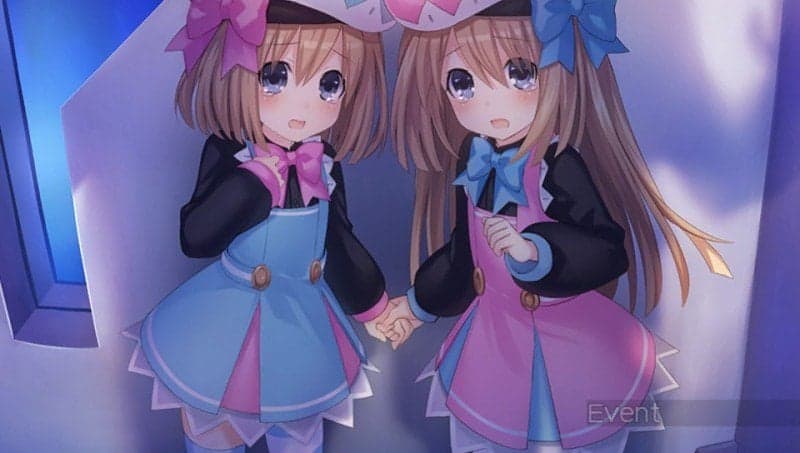 The ultimate question… is this game fun? In my opinon, yes and no. Playing through the game first time, it was fun to see how things develop. I went through, did as much as I can first time. During this time, I died in certain missions and came back when I felt prepared. It was fun to me. However, the non-fun aspects is when the game began to feel repetative.

When I redid certain missions to unlock treasures for outfits, it got dull. After repeating past missions 6-7 times, I got over it and didn’t bother unlocking it. This happened several times where I just found myself tired of the game. I did not want to continue to unlock outfits. I went back to the main game. The actual game and story keeps you motivated

The actual game and story keeps you motivated to see what happens next. You want to see if the school stays open or closed after all your efforts. There will be difficult bouts and you will have to go back to grind a bit and come back. However, finding that balance is key. The game can go from fun to boring rather quick. It is up to the player to find that balance. For me, my balance was replaying some old missions a limit of 3 times at most then going back to the new mission. It worked well after I gave up grinding for outfits. 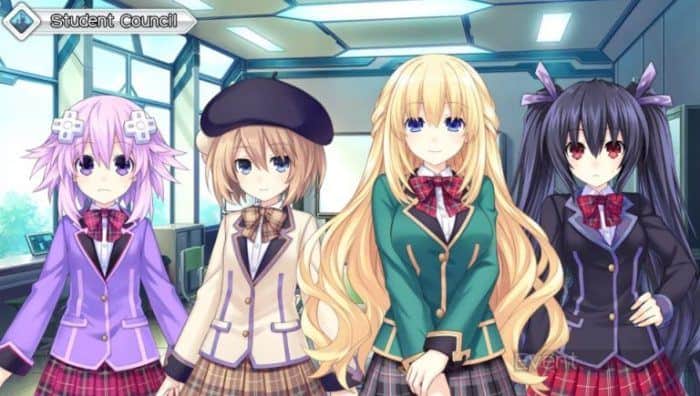 MegaTagmension Blanc + Neptune VS Zombies is a fun game in moderation. It definately takes elements from other games in the Neptunia franchise, but enough to barely stand out on its own. If you go in expecting something super serious, you might not have a good time. However, if you go in just to have fun, you will find it here. However, as stated in the previous sections, the key is finding moderation. Find the right balance as you play the game, and you will have a good time. If you just go in expecting to blast through it and get everything, you might burn out quick. Regardless of this, MegaTagmension Blanc + Neptune VS Zombies is a good and welcome side store in the Neptunia franchise. I welcome it with open arms. 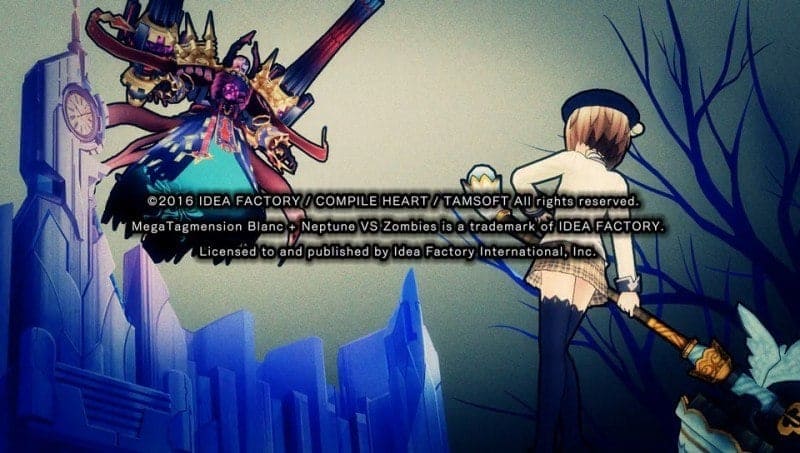 Until next game, Mgs2master2 out!

A gamer and jack of all trades. I enjoy many things, but overall just enjoying life. Hopefully, I can add enjoyment to your life through my articles or interactions.
@mgs2master2
Previous HENkaku 変革 Page Get’s An Update & New Web Address
Next PSVita: Useful apps & mod to use on HENkaku