In light of the release for Blizzard Entertainment’s latest IP Overwatch which launches tomorrow May 24 on PlayStation 4, PC and Xbox One, Blizzard have been uncovering some really interesting marketing from animated shorts focusing on heroes like Genji and Hanzo titled ‘Dragons’ to life-sized figurines which have popped up in three cities around the world. In the tweet seen below posted from the Overwatch account, the three locations Hollywood, Paris and Busan Korea highlighted “agents activating” however there wasn’t anything specific.

People first speculated that the aforementioned tweet below would be a reveal of new playable characters, but obviously now that’s not the case.

Once fans circulated the three locations, they were met with oversized Overwatch heroes in massive boxes showcasing: Tracer, Genji and Pharah. In the video bellow, Twitter user @BlueJacket and president of CSUF eSports, Jeremy Wan, was able to snap a short clip of the Tracer figure in Hollywood. The box outlines her in-game abilities and even a “Try Me” button which plays a sort of muffled sound.

Inside the box has the Tracer’s two guns along with her biography such as real name, location and her history. If you haven’t read our 8 Interesting Facts about Overwatch, click the link here to read more on Overwatch history and a couple of character bios.

Here is a shot from Twitter user @Mamytwink that he snapped up in Paris of the cyborg ninja Genji.

Finally, here is a shot of the Pharah action figure in South Korea snapped by twitter user @EscoBlades and Community Manager for Ubisoft Montreal Andrien Gbinigie. 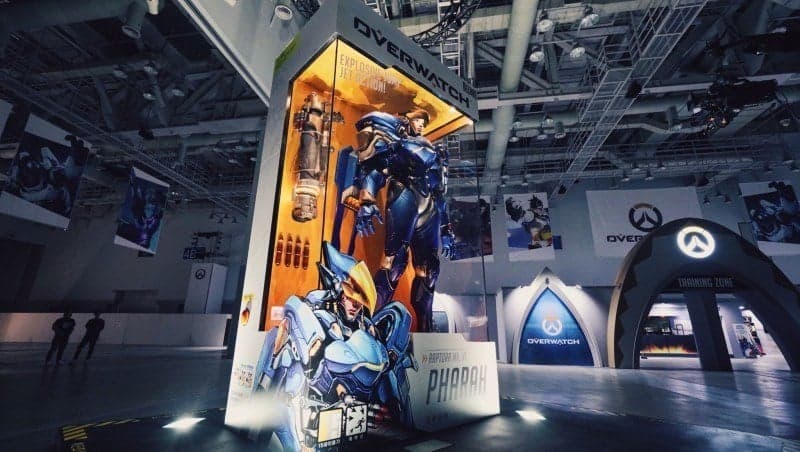 The fine print on the back of the box is a little bit tongue in cheek, outlining choking hazards regarding the oversized figures.

“While there is no physical or legal possibility to ‘play’ with the giant figures, you can play as 21 different heroes in Overwatch, releasing on the 24th May, 12:00 GMT, on major cosoles and PC. CHOKING HAZARD: It is impossible to choke on the figures due to their large size. However, choking during an actual Overwatch match is possible and may result in last-minute defeats, shame, embarrassment and public ridicule, courtesy of your peers. Prices and participation will not vary. The figurines are priceless, and participation is not possible.”

Below you can find a list of Overwatch launch times for all the different regions:

For more news and updates on Overwatch, don’t forget to follow us on our official Twitter pages @Hackinformer and @geestaar74