I been playing with the Raspberry pi again and found a new beta app to turn it in to a apple tv. The developer huisinro has been working on a new remote display product, called rPlay. In short, rPlay v1.0 supports Apple’s Airplay protocol, including the latest Airplay Mirroring technology, so you will be able to send iPhone/iPad screens to a HDTV powered by a Raspberry Pi. It supports real time audio/video streaming, rPlay is not for sale yet. They have released rpi beta version, Android and Windows version are coming soon.

Right now, more than 2000 RPi users are testing rPlay. They didn’t expect so many people are using the Raspberry Pi. You can send them a email or post to our forum to get the free beta. This is the first time Airplay mirroring is implemented on Raspberry pi devices. Here’s a Youtube video demo: 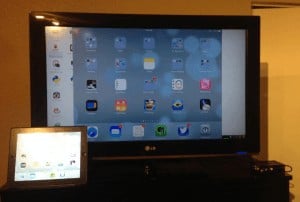 A screenshot showing iPad mini with iOS 7 beta on Raspberry Pi is also attached. For more info, please visit our company website, http://www.vmlite.com or the app store if you would like to try the beta. https://itunes.apple.com/us/app/rplay/id692511073?mt=8